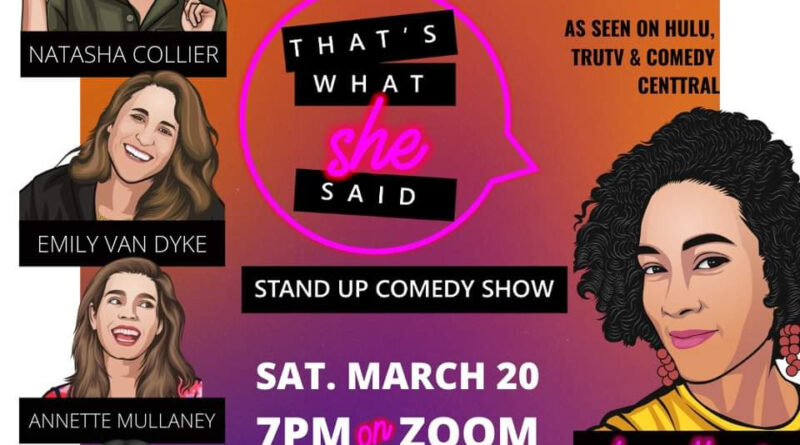 “So I’m like, coming up on my 35th birthday and I was like, ‘you know what? I’m gonna buy a whole wardrobe.’ So I went up on Fashion Nova. I got so much stuff in February 2020,” said comedian Annette Mullaney at the third annual “That’s What She Said: Stand Up Comedy Show” which was held over Zoom.

“Yeah, I had nowhere to wear these things, you guys. It got to a point where I was like, ‘find any excuse I have.’ If I’m outside of the house, I’m dressing. I don’t care the occasion. Like DMV, I’m in a cat suit. Last week, I went to the gynecologist and I wore the cutest little club number. A lot of rhinestones. She was like, ‘Are you going somewhere after this?’ ‘Like no, I hope you feel special.’”

Mullaney was one of five comedians performing at the comedy show. The other four were Lin Sun, Natasha Collier, Emily Van Dyke, and the headliner, Abbi Crutchfield, who is the host of the Hulu show, “Up Early Tonight.”

“In the beginning of the year, I wanted to get into the habit of yoga, so I tried a 30-day yoga program and on the first day I did it and I was super proud, and then on the second day I was like, ‘Oh, this again. Okay.’ Then, by the third day, I was like ‘Okay, you know what? Maybe I deserve a break, and then I’ll just do two the next day,’ so then by the fourth day, I was like, ‘two is too many,’ and so it just started to pile up and the thing that was supposed to destress me just stressed me way too much. It turns out if you just watch a yoga video without doing the moves, you’re still doing like 90 percent of it,” said Crutchfield.

“That’s What She Said” was the first event of Plethos Production’s 2021 Season. The next event is Uncorked on Saturday, June 5, which is also a stand up comedy show. Tickets are available at plethos.org.

“I read in a book that said, ‘If you want to manifest your dream man, you must act as if he’s already there.’ So I stopped paying my bills,” said Sun.

“That’s What She Said” was recommended for an 18+ audience due to the nature of the show’s comedy. The show also encourages audience members to have their cameras and microphones on, so they can interact with the comedians.

“To be honest, I kind of like the mask situation. I really don’t want to see any more faces anymore. I’m all faced out, you know, before. Like, I’m probably two years behind on remembering faces. I see people and I’m like, ‘I feel like I know you,’ but if everyone had a mask on, you’d never have to have that awkward conversation again,” said Van Dyke.

Plethos Productions hopes to go back to live person later in the year, but, until then, they’ll be held virtually.

“My favorite genre of books to read is a book that has been turned into a movie. That is the best genre of book. Just so that, when anyone ever asks me if I saw the movie, I can respond with, ‘I read the book,’ which I don’t know if you’ve ever tried that, but it just establishes the hierarchy of people having this conversation with me at the top,” said Collier.