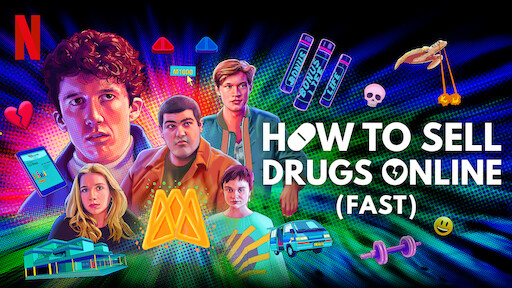 A teen from a small town in Germany becomes one of Europe’s biggest drug dealers – all because he wanted to impress his girlfriend. “How to Sell Drugs Online (Fast),” a Netflix original series, is very exciting, funny, and full of drama.

The show is originally in German, but is dubbed for English speaking viewers. It focuses on Moritz Zimmerman, a nerdy high school student.

When Moritz’s girlfriend comes back from studying abroad in America, she has started doing drugs and going to parties. Moritz feels like his girlfriend won’t like him anymore because he isn’t cool enough, so he decides to buy some drugs and bring them to a party to impress her. That’s when Moritz and his tech-savvy friend decide to open an online ecstasy store on the dark web, called “MyDrugs.” With their coding skills, the start-up takes off and grows faster than they could ever expect, as they get caught up in a thrilling story.

“How to Sell Drugs Online (Fast)” is unbelievably based on a true story. In 2013, in Leipzig, Germany, an 18 year old named Maximilian S., or “Max”, started an online drug store called “Shiny Flakes” to sell drugs out of his bedroom. He was extremely successful and sold an estimated 4.8 million Euros worth of drugs.

When the police eventually caught him in 2015, they uncovered 320 kilos of drugs from his bedroom in his mother’s house, worth 4.1 million Euros. Max was tried as a minor and sentenced to seven years in prison for his crimes. His sentence is very unusual because he is still permitted to walk the streets free during the day, but has to sleep in prison.

The mastermind drug lord even showed up to the set of “How to Sell Drugs Online (Fast)” to show them how to properly pack the drugs in boxes.

This show brilliantly incorporates the elements of a rom-com, a teen coming-of-age drama and a crime fiction all in one. It is very funny but also includes the dark aspects of the drug trafficking ring and the dark web. The first season premiered in May 2019. When the first season came out, it gained so much popularity that Netflix renewed it for a second season only two months after its debut, which came out in July 2020. There are only 12 episodes out so far, but Netflix has already promised a third season will be made.

Many teens can probably relate to this show because it deals with topics such as friendships, dating, and social cliques in highschool. It is filmed in a beautiful small town in Germany, as well as some scenes in the Netherlands. This show is a must watch if you are interested in a funny, yet exciting teen crime drama!