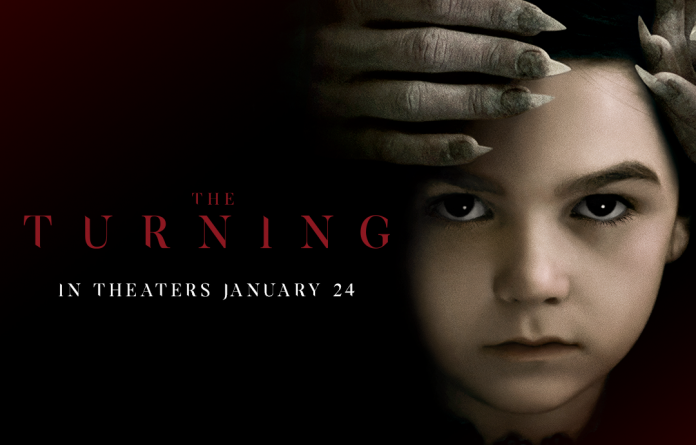 Leaving the comfort of her apartment and her roommate, Kate Mandell (Mackenzie Davis) packs her bags in preparation to become a full time nanny and teacher to two orphans after the disappearance of their old governess, Miss Jessel (Denna Thomsen). She approaches an isolated gothic mansion in the countryside and finds the caretaker, Mrs. Grose (Barbara Marten), in the gated garden.

“The Turning” is a 2020 adaptation of the 1898 psychological horror novella “The Turn of the Screw” by Henry James and was released on Jan. 24 as a drama/thriller film, although I personally don’t think it’s much of a thriller because there are some pointless scenes where a dark entity is shown to the audience but doesn’t effect the governess or story.

Before leaving, Mandell visits her mother, who lives in a mental institution. Her mother is shown in an empty swimming pool scribbling and painting on canvases. She hands Mandell a portrait painting she did earlier of her daughter as a farewell gift.

When Mandell first arrived at the estate, she developed an eerie feeling that made her paranoid. She meets Flora (Brooklynn Prince), one of the orphans, and learns about her trauma that caused her to be afraid of the gates. Up to this point everything is pretty much normal for Mandell until Flora’s brother, Miles (Finn Wolfhard), comes home from boarding school.

Upon discovering that Miles was expelled for being violent, she becomes a bit nervous around Miles who decides to prank her later on. Mandell found the old nanny’s journal, which she started to read while discovering what caused Miss Jessel’s disappearance.

Mandell noticed frequent strange occurrences happening to her at night, so she started to leave the lights on. Towards the end of the movie, things quickly pick up speed which becomes confusing for the audience. Mandell suspects the ghost that haunts the mansion might be their former horse riding instructor Quint (Niall Greig Fulton).

The story up to this point in the movie was good. However, when the movie comes to an ending, things become confusing and the ending is badly executed. It leaves the audiences wondering what happened, but not in a good way.

The actors and actresses did an amazing job acting, but the ending ruined the movie. It leaves the audience mad and confused.