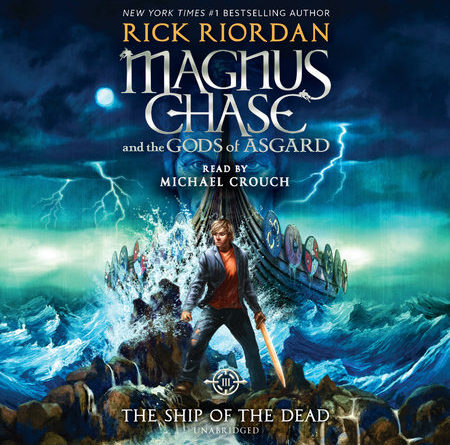 Ever wondered what happens after you die? Well, if you’re brave or noble enough you get invited to Hotel Valhalla, where all the heroes and warriors enjoy room service until the day of Ragnarok. Such is the story of Magnus Chase, a demigod who dies, wakes up and is told to stop Ragnarok in any way possible.

“The Ship of the Dead” is written by Rick Riordan, author of the Percy Jackson series, The Kane Chronicles, and the Heroes of Olympus series.

Magnus Chase was once a homeless teen, orphaned at a young age, who lived off stealing from stores and hunting for food inside dumpsters in the cold streets of Boston. His only friends were Hearth, a deaf elf, and Blitz, a dwarf with a short temper. Think his life is miserable? Well, it gets worse; he gets killed by Sert, a Jotunn giant while fighting for a sword that wasn’t even his.

On the bright side, he gets chosen to join his fellow heroes and warriors in Hotel Valhalla for his bravery when he stood up to Sert, a feat worthy of praise. In Hotel Valhalla, Magnus learns of his true heritage, that he is the son of Frey, a god of summer. He discovers that with his special bloodline comes a barrage of special powers such as healing, abnormal strength and ownership over a talking sword named Jack which once belonged to his father.

Discovering his true potential, Magnus along with his hallmates, T.J. (a former slave who fought bravely in the civil war), Mallory Keen (an Irish soldier who sacrificed herself disarming a car bomb), and Halfborn (an ancient viking who fought for Ivar the boneless), trains to prepare the final battle every dead hero of Valhalla prepares for: Ragnarok.

Magnus believes that the judgement day a.k.a Ragnarok is far off and that he has at least a millennia to prepare. However, Loki the god of mischief thinks otherwise. Loki, looking to trigger Ragnarok, decides to manipulate Magnus into untying the binds of Fenris wolf.

However, when this plan fails, Loki uses his own children, Samirah al Abbas (a demi-god who believes in Allah) and Alex Fierro (gender-fluid fashionista), who are both close friends of Magnus, to unbind his own chains to carry out Ragnarok himself.

With Loki on the loose, Odin himself reveals his presence and chooses Magnus, to sail along with his comrades, Samirah, Alex, Mallory, Hearth, Blitz, Halfborn and T.J. to stop the sailing of Naglfari, a ship captained by Loki said to trigger the beginning of Ragnarok and the destruction of the gods when it reaches Asgard. So the eight unique chosens voyage through gods and giants to stop the inevitable.

Will Samirah’s faith save her? Will Mallory be able to accept her past? Will Magnus triumph in his final battle? Or is Loki going to bring on the total destruction of Asgard? Find out in the next and final book of the Magnus Chase series: “The Ship of the Dead.”