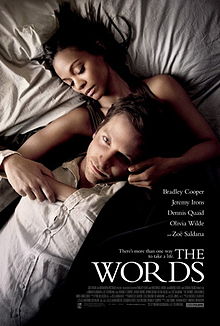 The plot revolves around a young writer named Rory Jansen, played by Bradley Cooper, who is having a hard time getting his writing published. Rory is married to Dora, played by Zoe Saldana, but his life feels unfulfilled without any real purpose, and he wonders if he’ll ever be the man he wants to be. Rory finds a beautifully written manuscript in an old briefcase and, desperate for a story, he publishes it under his own name.

What follows Rory’s decision is the literary success he always wanted: two more published books and money. Not to mention, a stomach full of guilt. Some of the film takes place in the 1940s, another segment in the present and another in the very recent past.  Although at times the timeline was convoluted, the element of mystery kept the audience intrigued.

The Words is the first film that I have seen from directors Brian Klugman and Lee Sternal, and it may well be the last. It by no means was a horrible film; however, I expected far more than was produced. The most disappointing aspect of the film was that there were many questions left unanswered. There was no true ending to the film as the credits started rolling.

The film was meant to be a romantic drama, but I feel as though it did not live up to that. The relationships between actors, the timeline, and the main point of the film were confusing at the least.  A story within a story within another story?  An author writing about an author who plagiarizes an author?  The film was not terrible, yet I would not recommend this film to viewers.