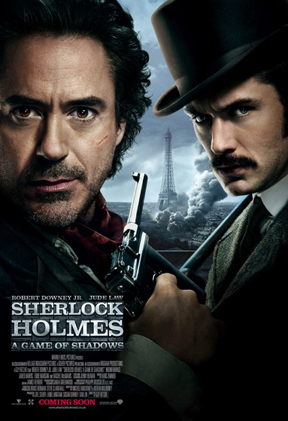 At the first strum of those quirky violin chords from the theme song of Sherlock Holmes: A Game of Shadows, I immediately sat a little straighter in my chair, ready for the sequel to be at least as entertaining as the first.  I was not disappointed.

The end of the first Sherlock Holmes movie introduces a new villain to the plot, Professor J. Moriarty, whose intellect and plotting rivals that of the great Holmes.  The sequel is a continuation of the “fish and fisherman” game between the two.

Taking place a decade before World War I, the movies features Moriarty planning many covert political maneuvers that may be the spark that lights the world into World War I.  Holmes tries to stop Moriarty in his diabolical scheme by engaging the help of an ex-anarchist gypsy woman and thoroughly ruining the honeymoon of his partner, Dr. Watson.

Unlike many sequels that will abruptly replace a lead actor and create an awkward shift in the original’s plot, Sherlock Holmes: A Game of Shadows, artfully exchanges Rachel McAdams with Noomi Rapace as the lead actress.  The watcher is left satisfied that Irene Adler (McAdams) is smoothly written out of the story, and can embrace the acting talent and slightly confusing accent of Rapace.

While watching this movie in 2-D, it is obvious that it was meant for a 3-D showing as there are many scenes where the graphics slow down and are zoomed on objects that are supposed to be flying at your face.  Despite this discrepancy, the effects are still eye-opening in 2-D but watching it in 3-D would probably be worth the extra cost.

Contrary to the first Sherlock Holmes that seemed to speed through quickly, this movie passes by slightly more slowly so the viewers are not as lost.  The original solved the giant mystery all at the end (the resurrection of Blackwood, the murders), but this one seems to resolve bits of the mystery along the way.  In addition, the genius forethought and actions of Holmes that continually save him and Dr. Watson later are demonstrated more in the second movie.  Nothing Holmes ever does is unintentional.

Sherlock Holmes: A Game of Shadows was a great movie that brought me back to the movie theater two days after I had first seen it.  The twisting plot and Holmes’ insane personality kept me interested and laughing throughout the movie.  I would recommend that anyone who has seen the first Sherlock Holmes to go be amazed by Robert Downey Jr. and Jude Law once again.  For those who haven’t seen the first movie, I recommend that they rent it, watch it, and then go see the sequel.