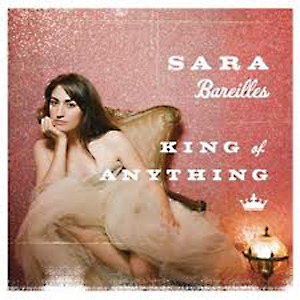 You might remember her from a few years back, with her 2008 hit single “Love Song.”

Her 2010 release of “King of Anything” recently earned a gold record (500,000 sales), which is on its way to matching “Love Song’s” triple Platinum (one Platinum record indicates one million sales). However, if this singer’s distinctive voice doesn’t immediately register as familiar, then perhaps the producers of Sara Bareilles had good timing with the release of her newest album, Live from Soho, which is featured on iTunes’s home page.

Bareilles is a difficult artist to critique, in this reviewer’s eye, or ear, as it were. Since “Love Song,” her style has matured, and she has scored some pretty well-known venues. Exhibit A: Soho, New York! It’s arguable that Bareilles’ live voice is even better than what is run through production in the studio, which, given the amount of digitalized auto-tune that can be heard in any given radio song nowadays, is an increasingly rare trait.

Her refreshingly natural voice doesn’t fail to impress in this eight-song album. The two classics, “Love Song” and ”King of Anything,” make a nostalgic reappearance. Considering the artsy embellishments of “Love Song” this time around, the live version just may be better than the original, oh-so-three-years ago.

In “King of Anything,” Bareilles at one point calls out to a band mate, “That was awesome!” The enthusiastic encouragement contributes to a genuine feeling of the standing and listening amidst the performers.

A personal favorite includes “Gonna Get Over You,” an uplifting breakups-are-overrated number, with the playfully off-beat piano accompaniment that made “Love Song” so endearing to literally millions.

Recommendation? Yes, to anyone (pop-loving or otherwise) who needs a break from synthetic sounds.