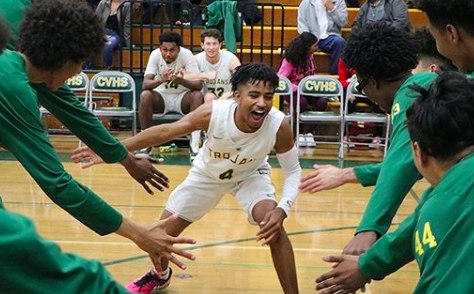 Arquil Hill stole the ball from the Mt. Eden Monarchs and gave the CVHS basketball team a huge chance to win. Without him, they wouldn’t have won their last game on senior night.

Point guard Hill transferred to CVHS his junior year from Bishop O’Dowd and was benched for eight weeks because he was a transfer student. When a player moves schools, they have to wait some time before getting playing time, so it doesn’t look like the school is recruiting athletes.

Hill started playing official basketball games at six years old, but seemed like he’s been dribbling a ball his entire life. His brothers have been a big help in his success, playing with him and pushing him to become a better player.

Moving to CVHS wasn’t a big adjustment, because Hill has been to Castro Valley schools before. He wasn’t worried about starting with a different team, because most of his new teammates were old friends.

“My last season as a Trojan was very bittersweet. I got a lot closer with my teammates and made memories that I definitely won’t forget. However, I am very sad my high school basketball career is over so soon,” Hill stated.

The basketball season came and went, like senior year usually does. Hill was very anxious and pumped going into his last game playing for CVHS.

“Going into senior night, I wanted to stay in the moment, embracing my friends and family who came to support. I wanted to block out everything else and enjoy my last game as a Trojan. My goals for the night were to have as much fun as possible, and of course win the game,” Hill happily said.

Winning this game was a must for Hill, and he was glad he got to share that moment with his friends and family.