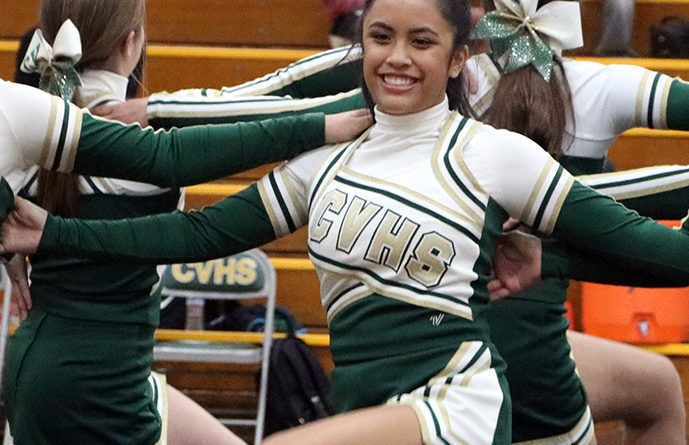 For anyone who might challenge the idea that cheerleading is not a sport, CVHS senior Lindsay Villamor is ready to convince them otherwise.

“We are so dedicated. And I think we work as hard as athletes in any other sport. We have hour-long practices every week. It’s nonstop. You do stunts, you dance, you do jumps. It’s really strenuous. It’s a lot of physical activity,” she said.

Villamor is the captain of CVHS’s competitive cheer team and a member of the varsity squad. According to teammates, Villamor always goes above and beyond for her team.

“She always puts 110 percent into everything and goes the extra mile to make sure everything goes perfectly,” said varsity cheerleader Nushi Abdullah.

A dancer since age 9, she began cheer at Canyon Middle School in seventh grade. “I was really into cheer in middle school. It was really fun to do, and I wanted to do cheer dances but I also wanted to try cheer stunts, too,” she said.

Villamor is versatile with cheer stunts. “I am a side base, but I started out as a main base. I’ve tried flying (the one being tossed in the air), everything. But I don’t back spot because I’m too short, “ she noted.

Her many skills and drive to succeed are an asset to the competitive cheer team, which she has been a part of since her sophomore year of high school. In fact, competing is Villamor’s favorite thing about her sport.

“I really like competing, honestly. I have a really competitive attitude. Competing is really fun to me…It’s really fun to do. I really hope as a team we do well in nationals, because I’ve always wanted to make it to the second round, and we really haven’t done that yet while I was in high school, so that would be really cool,” said Villamor.

Her most memorable moments from being on the team come through competitive cheer. “Nationals every year is really fun. Last year we went to Vegas and it brings you really close with your team. It’s really special to travel with them, and then compete as a team,” she said.

CVHS students can catch Villamor and the rest of the CVHS cheer squad at home basketball games in the gym. Their first competition is a United Spirit Association (USA) Regional Competition in Antioch on Jan. 13, and the USA Nationals will take place in Anaheim between Feb. 23-25, after which, Villamor and her team will spend time in Disneyland.