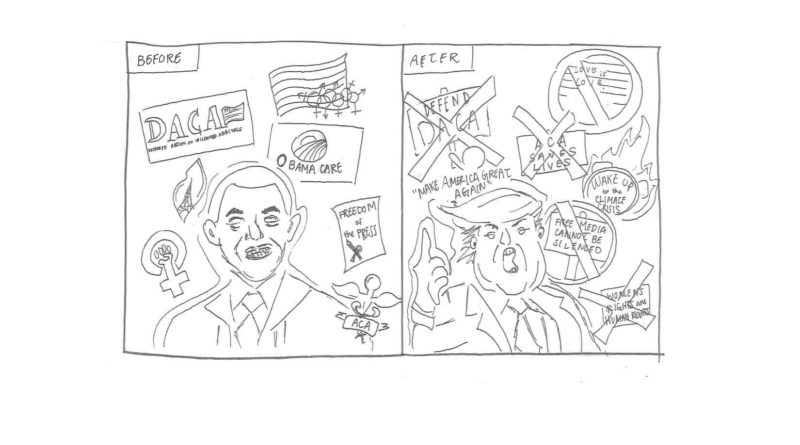 As our nation’s leader, we would first like to thank you for your great deal of endurance and the desire to make America great again. But we also have many concerns. As members of the Castro Valley High School newspaper, we would like to comment on some of your controversial decisions from this past year.

We believe the missile strike on Syrian chemical weapons was beneficial due to the harm chemical weapons possess. The missiles carried a powerful message, pointing out what exactly Syria cannot do to the civilians of its own country. Syria violated its obligations under the Chemical Weapons Convention and the rule of humanity. The response was appropriate.

While we agree that you were right to send missiles to the military base, our appoval of your handling of the situation Syria stops there. In addition to attacking the base, you need to allow the United States to open its arms to people under the treat of terrorist groups in the region. One way to do this could be to give more immigrants admittance to enter the US, and end the travel ban.

Besides allowing refugees to enter the United States, we also believe you should be more open with your immigration policies. The DACA program gave new opportunities to 800,000  young undocumented immigrants. We understand that you believe your actions against immigration will help decrease the chance of terrorist attacks and other dangerous foreign intrusions but cancelling DACA was unnecessary and cruel.

Beyond immigration, another issue we are concerned with is your misuse of social media. Outspoken criticism can turn a friend into an enemy and spread like wildfire the instant it is posted. It is tempting to share thoughts to gain validation through thousands of comments and likes but as the head of state, you should be extra careful about what you tweet.

We think you should use the time you spend on Twitter to address important issues like the environment. Global warming affects our entire planet, so everyone needs to contribute to its end.

Our economy has been doing relatively well, but we believe you have improved our economy at the expense of the environment. As an industrial country, America should participate in the Paris Agreement and maintain high air quality standards. We appreciate how the unemployment is low and that stock market profit has increased. Nevertheless, creating jobs that assist both our environment and the economy would be killing two birds with one stone.

You once said, “I try to learn from the past, but I plan for the future by focusing exclusively on the present. That’s where the fun is.” We ask you to consider our present concerns to create a better future for U.S. and the rest of the world.

Staff members of The Olympian