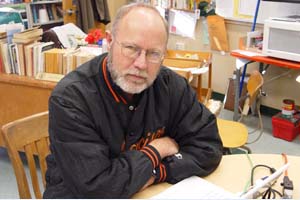 He lingered outside my econ class, waiting for teacher and new head track coach Matt Rainwater to come out and talk about the packet of papers he was holding. Peter Brewer looked graver than I had ever seen him. I had a sinking feeling their conversation would be about track team management.

A few hours later, I was watching the sunset while stretching on a gate after a short jog. I mulled over the image of grim-looking Coach Brewer, standing on the sidelines quietly instead of being the center of attention and shouting repetitive advice to runners passing by. There was something very wrong with that first picture.

This man was born to boss lazy teenagers around and to relegate seemingly useless facts to the general population. He remembers everything, and knows something about every subject.

I’ve heard several English teachers describe him as the smartest man they know, though I suspect this might be a running joke between them. At all of the cross country and track team banquets, Brewer needs no prepared notes to describe each athlete and his or her season – all sixty or seventy of them. That is amazing.

Despite the fact that I’ve never had Brewer for a class before, he is easily one of my favorite teachers here. For those who know him, he is without doubt one of the most memorable.

I began running as a sophomore. I was damn slow. I never seriously ran before joining the cross country team – nay, I probably never exercised before, at least not the way Brewer expected us to. The man just knows if you’re not giving all of your effort.

Several weeks into the season, I walked up the hill leading to Canyon Middle School, since I managed to convince myself that I was too tired to continue running. Imagine my surprise when Brewer radiated disgust and coldly told me to go back to the high school after I admitted my lethargy. I felt ashamed. I wanted to quit this stupid sport on the spot. There are definitely people out there who can’t handle Brewer’s way of coaching, and I wasn’t sure at first if I could stand it.

But he grew on me. If not especially sensitive, Brewer makes an unbelievably awesome coach. He has an insane devotion to the sport, spending much more time on it than what is necessary. He strikes fear into the hearts of slothful runners everywhere, yet those athletes often have a certain fondness for him. He is blunt and honest; he doesn’t dodge what he feels he needs to say and just tells you the way he sees things. It’s usually a joy to speak with him, unless of course you obviously underperformed in a race or just joined the soccer team.

Though Brewer’s practices were rarely easy, I somehow got to the end of three years of running. He made things difficult by demanding sweat and blood, but team practices were made fun with such activities as safety tape jogs and sweet watermelon after workouts.

I still continue to run in my spare time though I’m sure Brewer would find that hard to believe. Don’t worry; I likely won’t swing my arms correctly until he ends up six feet under. But Brewer pounded the aspects of integrity and dedication into us, and those things are more difficult to forget.

I will miss the sight of Brewer throwing whatever is in his hands to the ground before yelling “GOD DAMN IT!” I will miss the sound of Brewer running – like a locomotive that was half-crushed by a collision only to be resurrected by half a case of plungers. I will miss Brewer’s self-belittling jokes, often involving his apparent fondness for beer.

Many of the runners over the last quarter of a century have undoubtedly been influenced by Brewer, his dead-on advice, and his crazy mannerisms. No doubt few of us will be able to forget the echo of Brewer’s booming voice telling us “Running – of course it hurts!” even long after our shin splints fade.