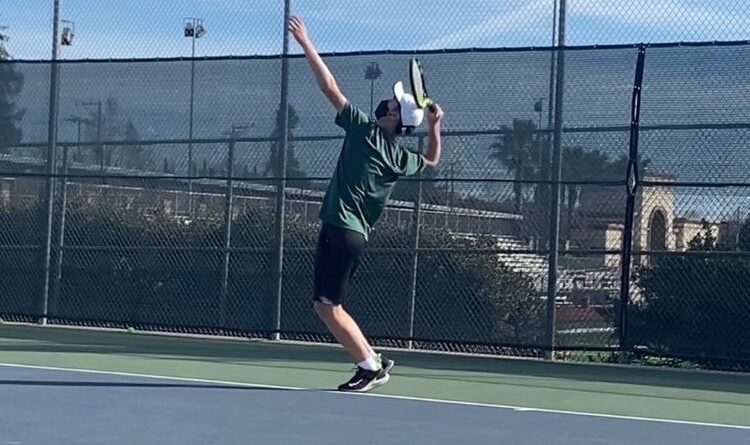 Many seniors attended Senior Awards Night on May 18 and received various honors, awards, and scholarships. Among these seniors was Aidan Chiang, who won a SportsHopes Community Service Award.

Chiang played varsity tennis for three years while simultaneously putting many hours into community service. He has also been very involved in his tennis team throughout the years.

“I’m not going to be cliché, and admit that I enjoy winning. Winning is really encouraging as an athlete, and keeps me playing the sport. But seeing as I haven’t been winning a lot recently, I’d say the friends I’ve gotten from tennis are what get me to stay on the team. I’d say I have more fun when the environment I’m playing in is more relaxed, not as competitive. I have these few go-to people that I rally with, and they make practice fun,” stated Chiang.

Being a part of the California Scholarship Foundation (CSF) provided many service opportunities for Chiang.

“I’m in the CSF Club, so I sign up for community service events there every so often and go to said events with friends. I’ve done things like work water stands at marathons, operate small kids’ carnival rides, prepare an auditorium for a party, and hold a flag and walk in a parade for an hour or two,” said Chiang.

Community service has led Chiang to participate in many events. From helping at carnivals to marching in a parade, Chiang’s community service events never fail to entertain him.

“My most recent event was the Chinese New Year Parade in San Francisco. Walking into the event, my friends and I all thought we would be working stands for a couple shifts or something similar to that. Instead, after we had checked in, we found ourselves being instructed to get into costume. Turns out we were actually a part of the parade. I felt so tricked!

“For the next few hours, we were waiting in position for different parts of the parade to pass before we joined. And then we walked for an hour holding up these giant banners throughout San Francisco. But it wasn’t all that bad, my friends and I explored the Embarcadero Center (where all the flags and costumes were held), took some pictures, and then went out to get boba. Overall, it was a happy memory.”