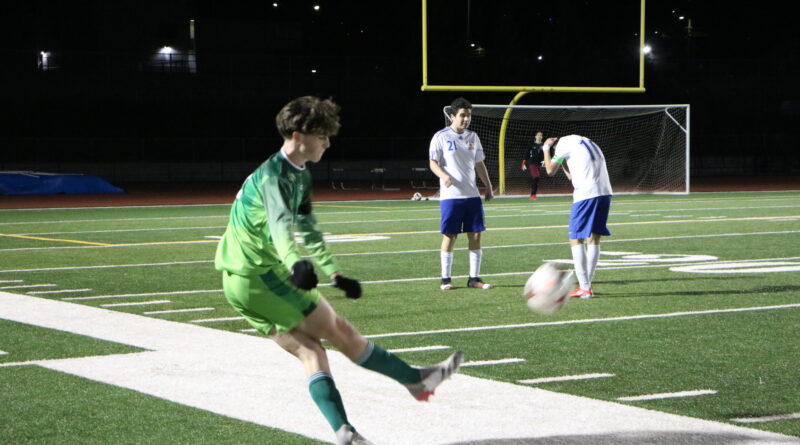 The Trojans lost 3-1 against Mt. Eden’s Monarchs on Jan. 21, despite the two teams evenly matched during the first half.

The Monarchs scored one goal toward the end of the first half, with two minutes left on the timer. On several occasions, both teams were close to scoring a goal, tensing up the audience.

By halftime, the Monarchs had only scored one goal with the Trojans still at zero. Coach Robert Olson gathered the Trojans for a huddle and motivational talk.

Center midfield Jacob Shannon took the lead in assessing the situation to his teammates.

During the second half of the match, the Trojans scored one goal. But they struggled afterward and suspected an opponent of faking injuries.

There were some injuries where players from both sides had to be temporarily put out of play, but one Monarch in particular, claimed injury at least three times. What outraged Trojans and their fans even more was that the player remained on the field, as if the injury did not happen.

Olson was quick to point out to one of the two referees that the opponent was allegedly faking his injury.

Despite the complaints, nothing was done about it during the match. The Monarchs scored a third goal with little opposition.

“Some of our finishes went pretty poorly, mine included,” commented player Michael Karapetyan. “We just needed to make better decisions in the final third (of the field).”

Regardless of the anger expressed by the coach and crowd, the Trojans remain optimistic about their upcoming matches.

“I think it’s pretty obvious we are a little mad, but I think that energy and anger fuels all of our wins so I think we should have more games to come, and (be) optimistic,” said Shannon.

After the loss, the Trojans had a record of four wins and seven losses.