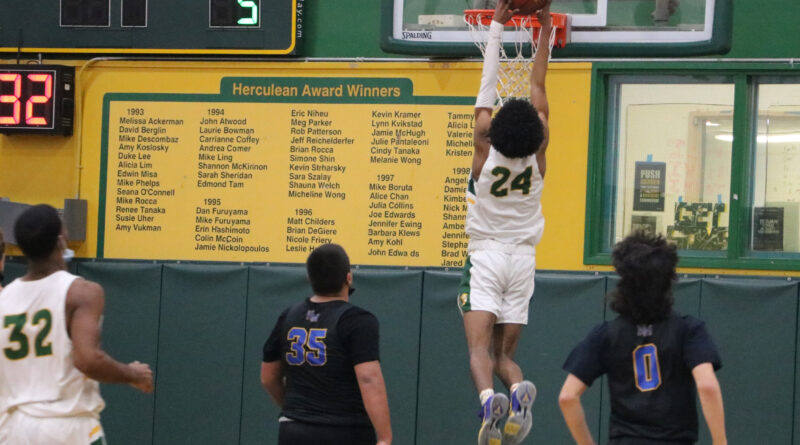 To start off a new season, the Trojans boys varsity basketball team played their first home game against Newark Memorial on Dec. 6. Trojans led throughout the whole game, and won with the final score of 95-56.

Mateo Jackson started off the game with the first three points for the Trojans. The first half had both teams eager over the possession of the ball. Trojans were quick with their lead 30-13. Though turnovers made the Trojans slow down, they were up 38-26 by halftime.

With remarkable shots already made in the second half, Ekam Sandhu passed the ball to Darius Jackson, who ran from half court to slam a dunk! The crowd cheered until the last seconds of the Trojans’ successful victory.

Finally being on the court after quarantine, the Trojans proved their hard work to be worth the wait.

“Last season didn’t really count. We only played ten games and a lot of stuff got cancelled. But now, everything’s close to being normal and we have a full schedule, so it’s exciting,” said returning varsity player, junior Darius Jackson.

New varsity players were thrilled to experience this win. “It’s great being on varsity because I worked hard to get a spot on the team. I’m excited to go on the road with the guys and be great with them,” said sophomore Dominic Chatman.

This win is just the beginning to the Trojans’ basketball season.

“We can go far if we continue to work and get better and stay locked in,” said coach Terrell Carriere.