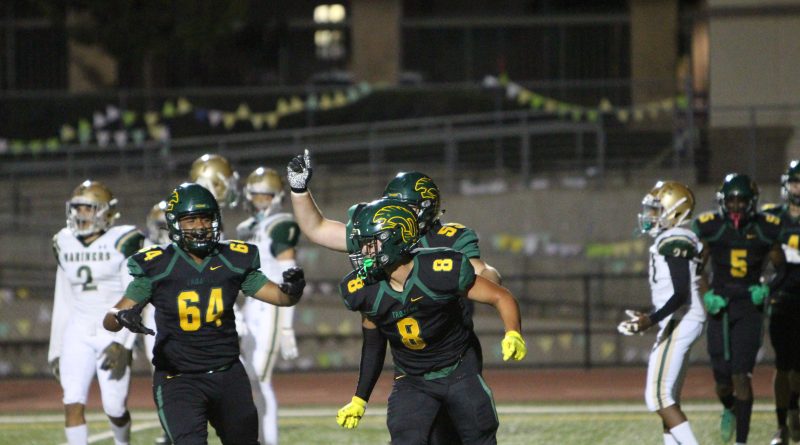 Sprinting down the field, Trojans wide receiver Jacob Rothwell, the CVHS Trojans scored the third touchdown of the night for CVHS.  That score would prove essential to win the homecoming game on Oct. 8.

The first half of the football game was filled with excitement as the Trojans secured a sizable lead against the Moreau Mariners. From the get go, the Trojan football team rushed to score over the other team, leading with Isaiah Nobriga scoring the first touchdown just minutes into the first quarter.

“They [Moreau] were definitely talking before this game, so it felt good to go in and shut some people up,” said Rothwell.

The Trojans continued their streak through the first quarter, scoring another touchdown. Jalen Melancon rushed the ball to the end zone, bringing the score to 14-0 Trojans at the end of the first quarter. By this time, the crowd was filled with excitement at the sizable lead the Trojans were able to achieve.

Rothwell scored the final Trojans touchdown in the second quarter, but a failed field point kept the score at 20-0.

“If you make a bad play you just gotta get back, we just stuck in there and we fought,” said lineman Emon Dost.

And fight they did. At the end of the second quarter, Moreau appeared to be nearing the end zone, but Rothwell intercepted a pass, keeping the Mariners from scoring.

The halftime show performed by both the CVHS Spirit Squad and Band and Guard effectively kept people’s spirits high as they anticipated the second half of the game. However, the team was unable to score in that time, and allowed the Mariners to score two touchdowns.

“We came up strong in the first half, but we let go in the second half. The score should be a lot closer to zero right now, definitely not 20-14,” said Rothwell.

Despite these struggles, the Trojans reigned supreme over the Mariners when the final buzzer rang throughout the stadium. It was definitely a game that kept spectators holding tight to their seats, but in the end the Trojans were able to pull through and secure their homecoming victory.

“We told our kids to play with the confidence they had played with last night, and from the get-go they did that. We kind of got into a lull in the second half, the kids just needed a pick me up, but in the end our guys made enough plays to win the game,” said football coach Denny Molzen.