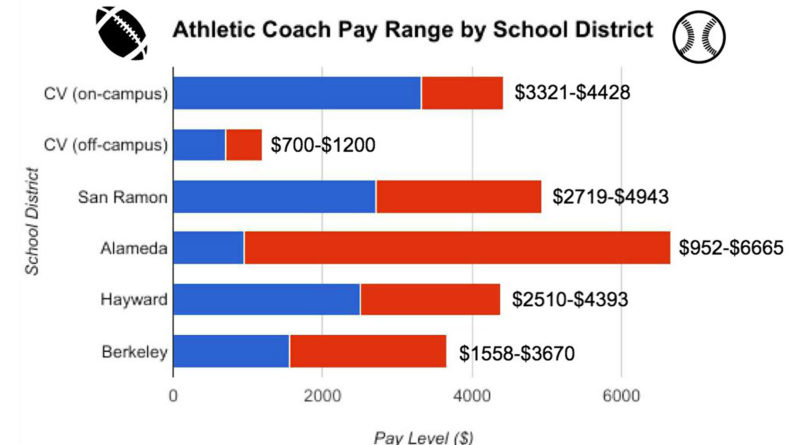 During the swim season of 2014, both the Trojans’ boys and girls varsity teams came in first in their conference. The championships were a few of many won under the nine-year head coach Brian Berry. Following these victories, Berry stepped down as head coach.

“Some of the important variables for athletes in having the same coaches include having knowledge of coach expectations, growing a program through the years with goals on improving an athletic program, and building a rapport with athlete, parents, other coaches, schools and the community. I stuck around for as long as I did mostly because of these commitments,” said Berry, a CVHS alum and former swimmer.

In the following years, the Trojan swim teams have seen two other head coaches, as well as three different assistant coaches. The championship streak ended. The truth is, they are among many teams to have experienced rapid “coach turnover.”

In the past five years, eight CVHS sports teams have had three or more coaches. One of the possible explanations for this is low pay, and the district’s decision to differentiate between on and off-campus coaches in determining pay.

When teachers coach, they are paid much more than non-teachers who do the same work, despite the fact that 90 percent of hired coaches are not teachers.

“The fundamental difference between our district and other districts is that in other districts, for sports stipends, they don’t distinguish between an on or off-campus coach, or as they call it, a certificated or uncertificated coach,” said Assistant Principal and former football coach Nic McMaster.

This is significant considering that nearly all of CVHS coaches are not teachers, and are therefore only paid around $700-$1,200 per season. By comparison, certificated coaches are paid around 6-8 percent of a starting credentialed teacher’s salary, which comes out to $3,321-$4,428.

Compared to other local districts, CVHS coaches are paid sometimes less than half the amount they would be paid at other schools with similar listed stipends, due to the district’s policy of paying differently based on whether or not the coaches are certificated staff members.

As McMaster explained, the objective behind this is to encourage the hiring of on-campus coaches.

“Athletics here at this school hook about 600 students and that’s about 20 percent of our enrollment. Athletes, on average, make more school days than if they weren’t playing sports,” said McMaster. “We know that having a teacher coach here on campus is really crucial for keeping them engaged even beyond the season, so as a goal, we’re trying to do is create more on-campus coaches.”

While there are several other possible factors that could determine whether coaches stay or not, less pay than other schools is still an unignorable fact for

non-teaching coaches who devote long hours to helping their athletes.

“I, to this point, have not had a coach say ‘I’m leaving here because another school pays me more money.’ That’s not to say that’s not happening because I only go off what people tell me,” said McMaster.

While the salary rates for coaches who are also teachers increase with each salary increase, the rates for off-campus coaches change separately.

“It’s been something like 20 years since the pay schedule’s been changed,” said Athletic Director Marie Gray, who also coached softball for 26 years. “We’re living in different times, and in the economy we’re in now it just isn’t enough.” Gray has asked the district to consider raising coaches’ pay.

Coaches and student athletes find that if teams are run by the same coaches for many years in a row, it is beneficial to their program, both for the environment and the performance of the team.

“If they’re a good coach, having them for a long time will improve how the group performs, because then you have consistency in your workouts, and they get to know you better as an athlete. That way they can coach you to specifically what you need to work on, to your specific styles,” explained senior John Anthony, a four-year competitor in track and cross country.

Teachers and coaches are hopeful that some changes can be made that will benefit both coaches and student athletes.

“Having a humongous gap between full-time teacher coach’s pay and non-teacher coach’s pay makes a difference. I worked out my hourly rate just for a laugh and found that I made roughly $4 an hour for the time spent. I’m not joking here. All in all, I loved the position but I was essentially breaking even after my costs,” said Berry.