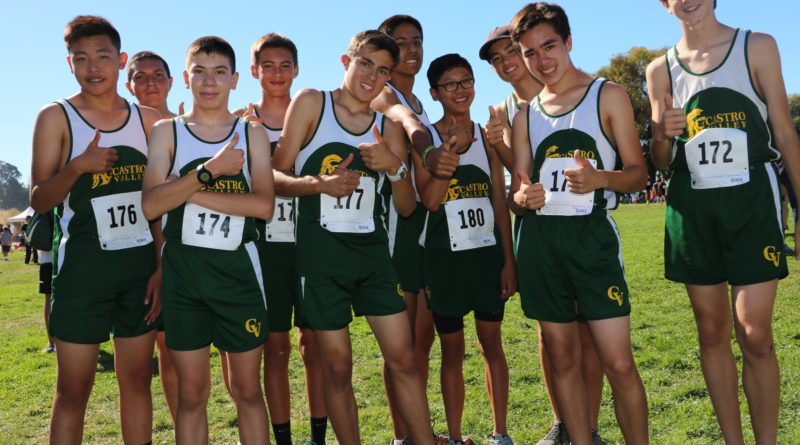 CVHS cross country teams represented their school with pride at the WACC Finals meet on Saturday, Nov. 5. Many of our athletes had their chance to shine, achieving new personal records.

The challenging course at Hayward High was three miles long and pushed athletes to the limit. Star athlete Reilly Berberian ran his race with a time of 15:47, and received third place in the boys varsity division. He was followed closely by senior Vincent Friesen, who ran 16:18, a personal record.

Senior Danika Newlin achieved a personal best time of 18:46, earning her sixth place in the girls varsity division. Monica Paredes, another senior, gave it her all, and ran a personal record of 19:38.

The junior-senior JV division of the race also featured some outstanding performances. Runners John Anthony and Chris Lau placed fourth and fifth, both getting personal records of 17:50, bringing a lot of pride to the team.

The girls also pulled their weight in the junior-senior JV division, placing first and third. Amberley Tee plaved first with a 20:34, while senior Rebecca Draviam placed third with a 21:20.

“It was an amazing experience to be a part of something so great. I’m so glad I got to be a part of this victory, and I hope all my teammates had as much fun as I did,” said junior Sidney Shaw.

The freshman-sophomore boys division was also well-represented by runner Hunter Bowersmith, who snatched second place with an amazing time of 17:33.

Anya Von Euw and Michelle Bzowski performed impressively in the frosh-soph girls race, earning second and seventh places with times of 21:01 and 21:37, respectively.

Overall, the teams showed their Trojan spirit and ran their hearts out. However, for the seniors, their last run at CVHS was a mix of emotions.

“It was a bittersweet moment, a mix between the great feeling of running with your teammates, and at the same time, knowing it’s gonna be our last time running together, as a team. I tried my best to just enjoy the moment for what it was,” explained senior Sean Gaffney.