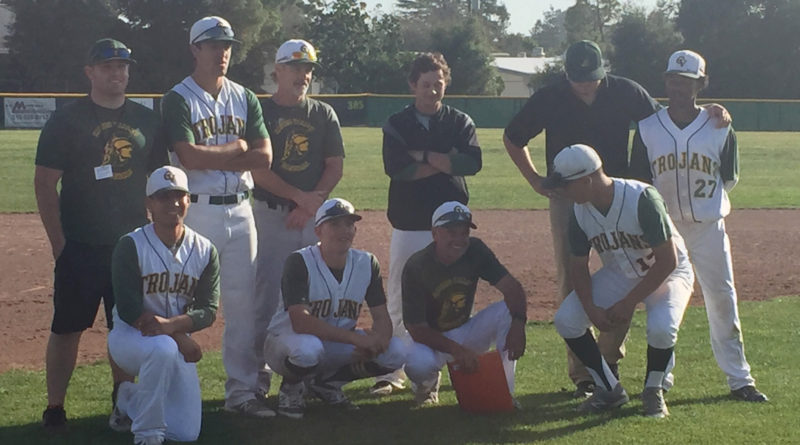 The Trojans varsity baseball team took the Encinal Jets on a beautiful Thursday May 12 with clear skies to celebrate the last game of the season and senior day as well. The game was dominated by the starting pitchers throughout the whole game who did not allow a run through five innings.

The crowd went wild whenever there was a potential rally with men in scoring position but it always came short as there was a runner left stranded either at third or second base.

In the sixth inning however, Matthew Barraza, the designated hitter and a very hot hitter for the Trojans throughout the last five games, led off the inning with a scorching double down the third base line past the outstretched glove of the third baseman.

in case there would be a close play at the plate. Following a lineout to left field for the first out, right fielder Joaquin Soto came up to the plate and belted a double to the left center gap allowing Penland to cruise to home plate and give the Trojans a 1-0 lead.

Brian Tognolini was next after Soto and he came through with an RBI single to cushion the lead to two runs. Two runs was all the Trojan pitcher Antonio Costa needed as he finished out the game allowing no runs.

“It was a great team performance by every single player on this team, that’s what led us to this win,” said Costa.

The Trojans are hoping they can get a spot in the NCS Tournament so they could extend their season. They are ranked 15th overall this season and the top 16th teams have a good chance of making NCS.