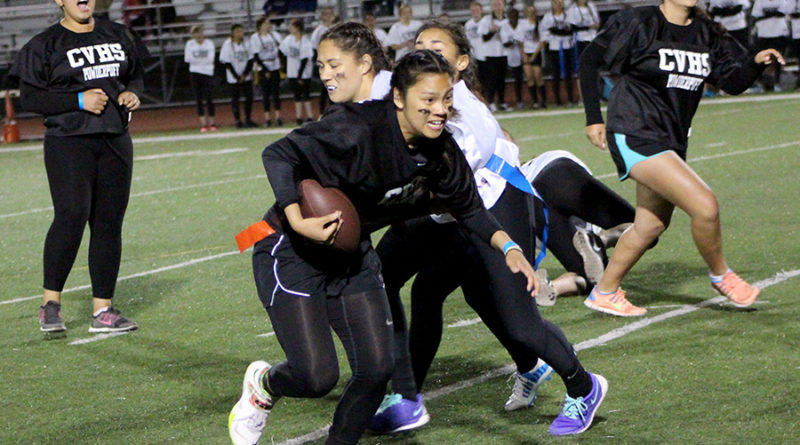 As the sun set over the CVHS Trojan stadium, a line wrapped around the ticket booth as excited students and parents shuffled by the field to watch the Powderpuff football game. The annual game took place on April 29, and the weather was perfect for an exciting game. The food trucks helped encourage people to roam about the sidelines as the two teams warmed up for the game.

The senior/sophomore team wore black jerseys while the freshmen/junior team wore white ones. As the ladies were warming up, the spirit boys decked out in green and gold shirts, flannels, and short shorts stretched and made their way towards the home game side to get the crowd excited.

The first quarter was a close one, but the junior/freshman team pulled ahead with the first touchdown of the game scored by junior Giana Wright. Going into the second quarter, however, the senior/sophomore team was able to tie the score with a touchdown. The second quarter was far from over, and with many competitive maneuvers from the junior/freshman team, the final result going into half-time was 12-14.

Before the spirit boys started their routine, the first Spirit Stick award was given to the freshman and junior classes for being the most spirited during the second semester school week. After the Spirit Stick award was given, however, the main attraction for half time began. The Spirit Boys ran onto the field, and (after a minor technical difficulty) started their routine. The Spirit Boys danced their hearts out and left the crowd cheering and laughing. What they lacked in coordination, they made up with in heart. The boys showed their skills with a multitude of dancing techniques to very popular songs. The amazing show ended with an epic “promposal” where the boys had “Sr. Ball?” spelled out on their backs. It was an unforgettable show, and the crowd deeply enjoyed the entertainment. 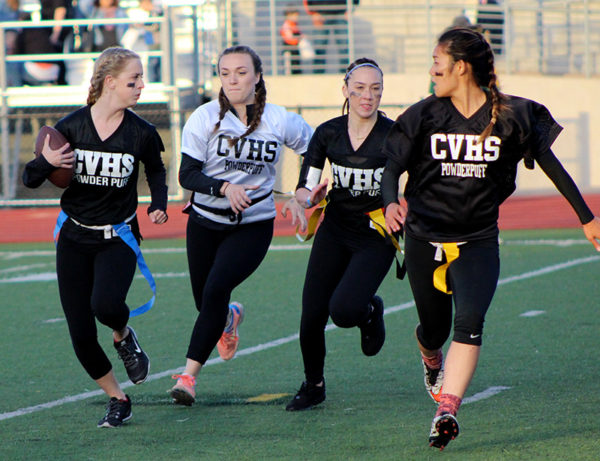 The third quarter of the game started, and the senior/sophomore team was able to pull ahead of the junior/freshman team with a touchdown.

Things began to heat up in the fourth quarter. The senior/sophomore team started to significantly pull ahead and was able to end the game with a 26-14 score. In the end, the victory went to the senior/sophomore team. Although the teams were divided, the school spirit was unanimous. The Powderpuff game this year was a wild success.