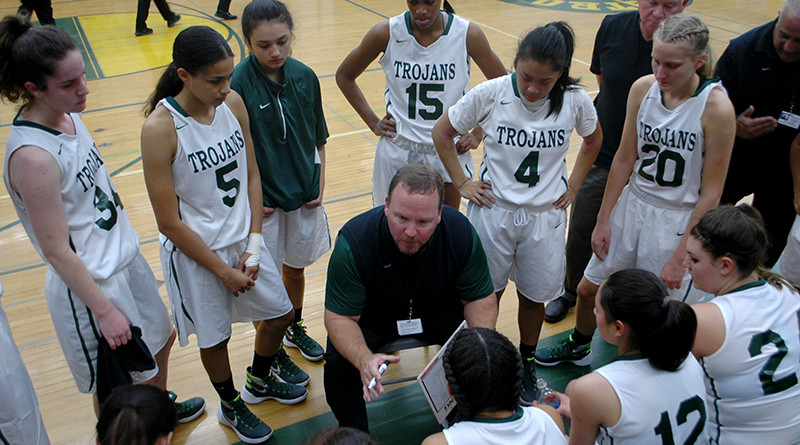 The girls varsity basketball team this year has led the season with an impressive 17-2 record and is sometimes even referred to as “Castro Valley High’s own Warriors.” The question everyone wants answered is “How?” and “Why?”

Is it coaching? Is it a star player? Is it pure raw talent?

The Olympian got a chance to chat with the much-talked about team’s coach and players to ask them these questions. Though many different teams credit their success to the coaches or one power player’s abilities, the Trojans think differently.

“This team has good chemistry,” head coach Jim Lemmon explained. “I mean, talent helps but it’s really these girls. They have great work ethic, good understanding of the game, but the underwire thing is working really hard.”

Players also expressed their opinion on the reason behind their success.

“Because we have a very deep team, there’s no dropoff level of play,” stated player Trinity Copeland.

Well-rounded is an understatement of how well these group of girls play. Not only do they possess a killer defense, but all of the members of this team are well-equipped athletically. They’re able to run throughout the whole game, there is not one girl that is left behind on their sprint to victory. As opposed to other years and other teams in the league, the Trojans’ girls varsity basketball team are able to tire out their opponent if needed with enough energy still left over for a victory lap.

In the past 11 years, head coach Lemmon has “never had success this deep in the season.”

Bailey Jones, a.k.a. “Beyonce” to her teammates, gave more insight on why the team is successful, “Because this year we work together better, this year we’re still a team. We have only a couple new players but we’re all still together,” she said.

The girls varsity team have only received two new players since last year and so most of the team continues on from last years’ roster.

Jack Kennedy, assistant coach to the girls team commented on his newfound experience with the team, “It’s an extremely good team, they work hard, they’re very polite, nice girls. It’s my first year here coaching and I feel so welcome, I’m having a great time!”

When asked if Lemmon will continue this miraculous streak next year he remarks, “I hope so. I mean, next year there will be some team players that will graduate but I feel good about the kids on junior varsity. Fingers crossed.”

It is a given that Trojan fans will continue to watch the girls varsity basketball team with their eyes open and on the edge of their seats, waiting, for another victory to inevitably occur.