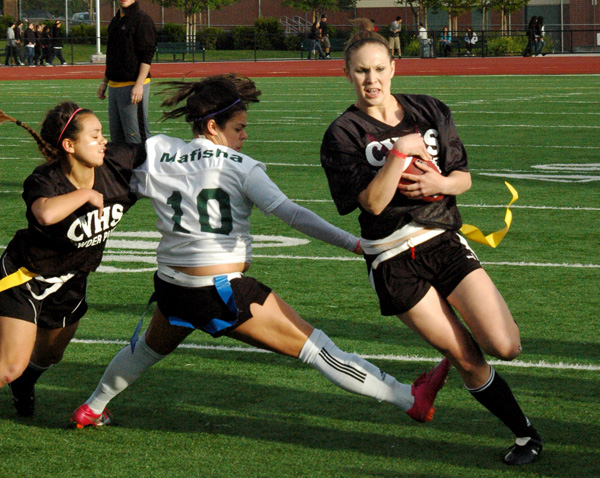 A flurry of girls running around and tackling each other filled Trojan Stadium in the annual Powderpuff football game on May 20.

There were two teams, one composed of freshmen and juniors (Black), and the other composed of sophomores and seniors (White). They played against each other just like in normal football. Blood was spattered and fingers dislocated just like in boys’ football. The sophomores/seniors won by a score of 22-6.

Many girls like the fact that they’re able to play football on a high school team. It’s a unique experience CVHS offers them. It lets many girls have the opportunity to feel like football stars.

“I did it so I could get the experience of playing football,” said sophomore Regine Padilla.

“My favorite part of the game is when the team got in a circle and yelled really loudly while they ‘dougied’ in the circle,” said sophomore Adrianna Alvarado.

Powderpuff is a great activity CVHS  offers to its students. It broadens the horizon of our views on sports.
For anyone that’s said “Girls can’t play football,” anything boys can do, girls can do better.