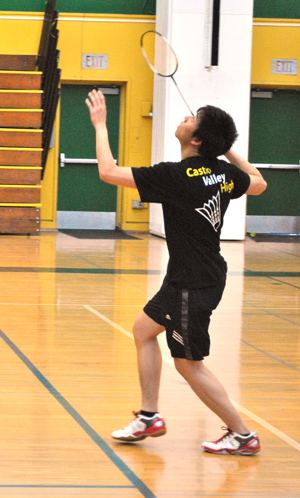 “I think it was a close match. Although our team could have gotten a few more wins, I think we still did a phenomenal job, like always,” said varsity team captain Judy Tian.

From the beginning, the intense match started out with each school’s captain, Daniel Yim from CVHS and the captain from San Leandro. Students were cheering and supported their school as the heads of the team went up against each other.

“It was all right; I lost, but it was great opportunity. My greatest strength is the smash and I am trying to get back in shape,” said varsity team captain Daniel Yim.

Another great match was the boys varsity number one doubles. The tension and excitement in the air was palpable as seniors John Lee and Micheal Wang fought valiantly for their eventual victory over the opponents.

As a team, CVHS badminton team is planning to do more drills to practice their techniques and play more games.

“I love my team, I think they are all amazing players and people. I have faith in them and I believe that we have the potential to take league champions this year!” said Tian.