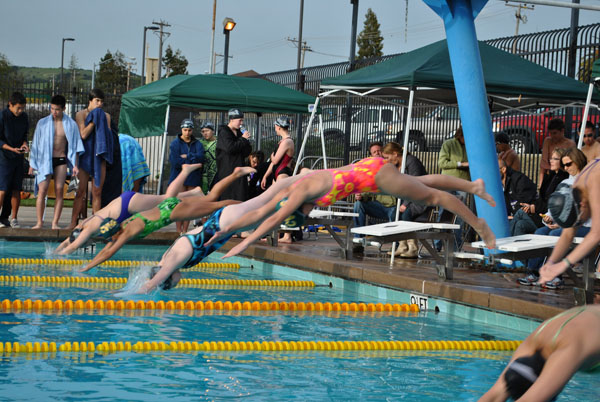 The CVHS varsity and JV boys and girls swim teams defeated Piedmont High at the second home meet of the season on March 4. CVHS swimmers performed well at another meet  against Granada on March 11; all teams won except for varsity girls.

Although the varsity girls lost against Granada High, freshman Amanda Houston pulled off what junior Jason Yu described as “incredible.”

“She swam an incredible 500-freestyle, trailed a Granada swimmer for nearly three-fifths of the swim, then pulled it off in the last 200 [yards] for the win,” said Yu.

CVHS kicked off the swim season with tryouts on Feb. 3.

“We have a really strong team with a ton of freshman girls,” said coach Brian Berry. “The boys team is especially strong this year as well.”

“I enjoy swimming for myself, not just to beat others,” added freshman Cassidy Rubino, who swims 50-free and 100-breast.

When asked of the goals for this season, Berry responded, “To win our league again. This will be the fourth year in a row for the girls, and the sixth year  for the boys.”