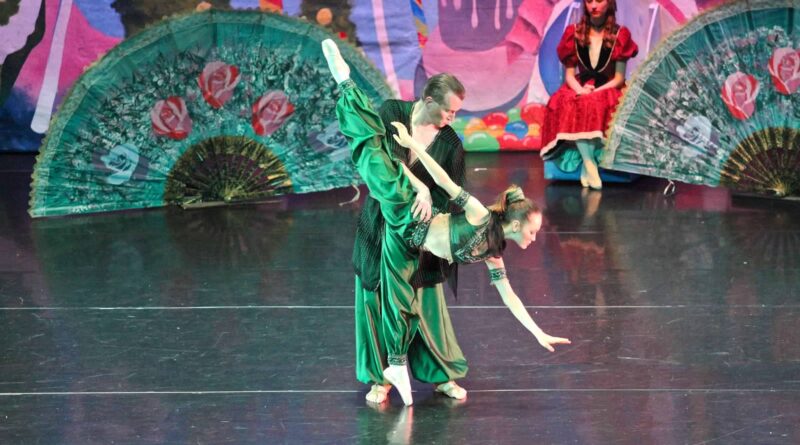 “The Nutcracker” is a classic holiday tradition for many, including myself. Set in the early 1800s, “The Nutcracker” tells the story of Clara (or Marie depending on what production you’re watching) who is gifted a nutcracker by her uncle and then whisked into a magical Land of Sweets after a battle with a rather rowdy group of mice. It’s a feel-good ballet with a classic score by Tchaikovsky and whimsical colors and costumes. But sometimes the costumes and choreography fall away from fun and festive and go more into offensive racial stereotypes.

The idea of the Land of Sweets is that each sweet originates from a different country: you have Spanish Chocolate, Russian Cake, Chinese Tea, and Arabian Coffee (there are a few more but they aren’t given a national origin). The costumes and choreography are supposed to be inspired and represent the nationality that the sweet comes from. The two that are typically displayed the most problematically are Chinese Tea and Arabian Coffee.

In some ways these interpretations and misconceptions of these cultures are almost expected, as said by Daniel Byrd, director of Spectrum Dance Theater, in Dance Magazine: “Anybody that was not European is presented as exotic—the notion of the Other.” You see this “exoticness” portrayed in the costuming and choreography that varies greatly from the rest of the ballet. “The Nutcracker” tells the story of a young German girl who journeys into a world filled with people that she had never seen before. “The Nutcracker” is then portrayed through the eyes of an ignorant white person. People of different nationalities and races are new, meaning there is a lack of understanding about these cultures. “The Nutcracker” shows the European gaze of these people, simplified and inaccurate.

The Tea dance has long been characterized by the racist portrayals of Chinese people, equipped with pointed fingers in the air and offensive makeup. It can be performed by white people who use eyeliner to mimic an almond eye shape. The use of racial stereotypes and make up to turn non-Asian people into appearing Asian is harmful as it perpetuates an image of what Chinese people look like and makes them into caricatures. The choreography often used in the dance can be seen as a joke and untrue to actual Chinese styles of dance and movement. Choreographers often forgo traditional Chinese movements and opt for springy, bouncy movements with the dancers’ fingers extended (it is not clear why this is used, the best reason I can come up with is to mimic chopsticks), a movement that has no connection or history in Chinese dancing, instead of appreciating the diversity and depth of Chinese dance. The Tea dance has seen the most change over recent years, after the wave of AAPI violence and racism that spread with Covid, there were many calls to change the choreography and use Chinese choreographers to create an inoffensive and accurate dances that included aspects Chinese culture, but that still remains in large companies, with smaller dance companies keeping their choreography and costuming the same.

The Coffee dance has yet to see the changes that the Tea dance has. The dance is sexualized, the music is slow and smooth and dancers often use their extension to move through the music, this use of extension and the choice of costuming highlight a dancer’s body. I have danced this dance since my freshman year of high school and was told or recommended that I act sultry and mysterious. It’s not a dance where you smile, it is where you were supposed to act serious and mature. This dance presents the dancer as an object for observation and attraction. The costume, despite it supposed to be of Arab origin, is skimpier than the rest of the show; I tend to think of the costume as Jasmine from Aladdin, The way that the feminine person is meant to act in the dance and how they are dressed doesn’t represent Arab culture or ideals in the slightest, it sexualizes them and ignores the modest expressions of Arab culture.

The problem isn’t that it is white people playing these roles. The problem is that far too often white people are changing their features in order to replicate other races—this includes using foundation to make their complexion darker or drawing on cat eyes. It isn’t necessary for dancers to do this in order to perform the dance, it’s just offensive.

Highlighting differences between cultures isn’t inherently bad, but the problem comes when the differences are mocked or seen as inferior.  “The Nutcracker” doesn’t have to and shouldn’t rely on racial stereotypes to get their point across. The show and the story arc has a lot of potential to be celebratory of different cultural identities and values. The costumes can celebrate traditional styles of dress and may oftentimes be even more beautiful and fitting for the dances than they have been before.