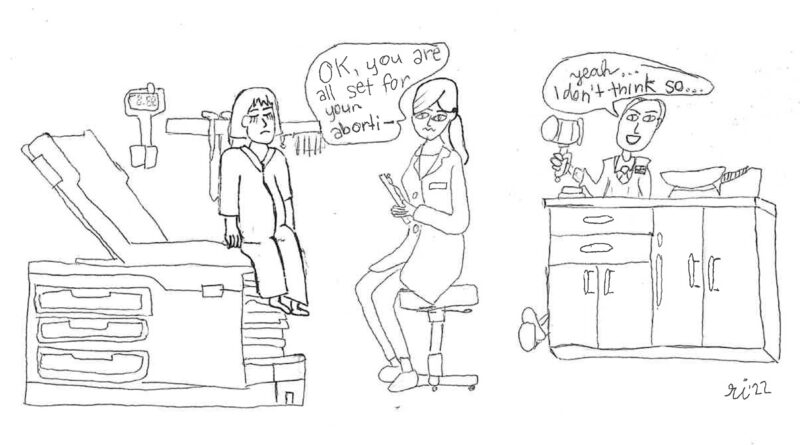 Abortion. People’s bodily autonomy being debated by the government. A lot has happened reguarding the right to a safe abortion.

Roe v. Wade saw the Supreme Court floor in 1973, and affirmed the right of people who are able to get pregnant to be able to get abortions. Abortion was declared constitutional through this case, but with limitations making them hard to get.

These past years, individual states have been creating abortion bans: Mississippi, Florida, and Arizona at 16 weeks; Wyoming at ten weeks; Texas and Idaho at six weeks, Kentucky has a near total ban; and Oklahoma says abortion is only permitted in medical emergencies.

After the upcoming June Supreme Court ruling, which has the possibility to overturn Roe v. Wade, states will have more leeway regarding abortion. Already, people in many states have little or no access to abortion, but this would restrict access further. Twenty-one states are certain to ban abortion.

There has been a leaked Supreme Court voting plan explaining that our current court will overrule Roe v. Wade. It says “we hold that Roe and Casey must be overruled.”

Here at The Olympian, we believe that abortion is a human right that should be accessed without limitations, because the government shouldn’t control bodily autonomy.

The society we live in doesn’t set up a system that makes it easy for pregnant people or their offsprings to survive. Not everyone is financially or mentally stable to have a child, not helped by the statistic that people assigned female at birth are more likely to live in poverty, and especially people of color. Along with this, the argument for just putting up the baby for adoption or fostering is not viable because these systems are very flawed.

Just because it is banned or inaccessible doesn’t mean people will stop having abortions, in that case—which is already reality for many, people just turn to unsafe methods for this neccessary procedure.

Mike Pence spoke at a university recently and was asked about having a gay child. He responded that he would still love him, but doesn’t agree with his constitutional rights to get married, or be himself in society, because it doesn’t align with his beliefs. He said that the rights of people need to allow for religious belief. This is similar to the argument of anti-abortion people; “because I don’t agree with it, no one should have it.” Separation of Church and State would mean anti-abortion religious laws are unconstitutional.

Having religious reasoning to ban abortion is also unconstitutional because it encroaches on others’ religious freedom. For example, Jewish law requires even third trimester abortion if there is any possibility of harm coming to the pregnant person.

Instead of banning abortion, we believe that changing the social culture of sexual health. Schools should have contraceptives and more comprehensive sex education for all people (not just cishet relationships).

We also believe, since California will not be following suit of banning abortion with the overturn of Roe v. Wade, that California should become an abortion safe-haven, providing this essential healthcare service for people who are unable to access it in their state.

We at The Olympian believe that banning abortion is not only unconstitutional, but unethical.

8 thoughts on “Supreme Court should uphold the right to abortion”