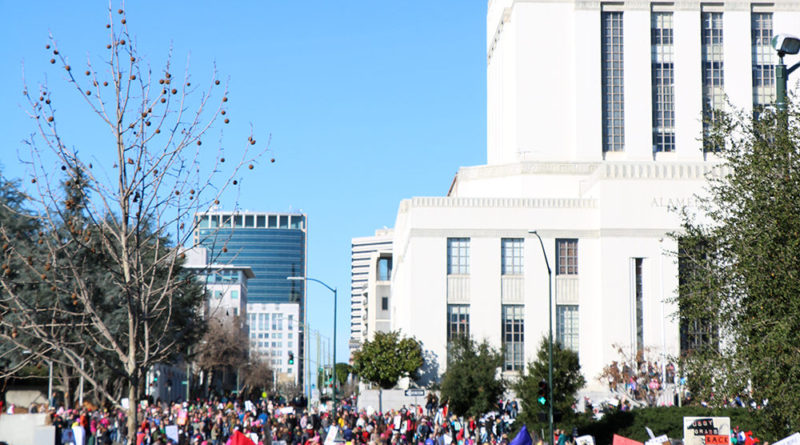 I dove into a crowd of dancing protesters at the 2018 Oakland Women’s March to snap photos of the ringleader: an elderly woman leading dozens of protesters of all ages through emphatically joyful dance moves, barely in time to the pop songs she blasted from a large speaker. When Sister Sledge’s “We Are Family” came on, I put the camera away to join the dancers.

It wasn’t the optimism and unity of the dancers that surprised me, but the range of ages. I had expected the Women’s March to be, for the most part, millenials and post-millenials. While I shouted “All my brothers, sisters, and me” with a middle-age woman in leg warmers, and tried not to step on the baby boomer behind me, I wondered why I thought older generations wouldn’t show.

According to writers from The Huffington Post and Washington Post, my generation, people born from the late 90s to around 2015 (Generation-Z or Post-Millennial) are especially inclined towards activism. Considering activism’s growing link to social media, a digital area our generation navigates best, in combination with our coming of age in the most tumultuous political climate since Nixon, an inclination towards outspoken protest makes sense.

But after seeing the range in ages at the Women’s March, I’ve realized my generation is not more activist-y than any other, and this stereotype of Generation-Z as uber-activists is not only wrong, it is harmful.

Founders of the Black Lives Matter movement Alicia Garza, Patrisse Cullors and Opal Tometi, Chinese political activist Ai Weiwei, and Me Too leaders Tarana Burke and Alyssa Milano, whose activism is directly linked to social media, were all born before 1985.

As Generation-Z becomes old enough to shop without parents, corporations have jumped on the activist “trend.”

It’s now common for teenage clothing stores like Forever 21 or H&M to carry T-shirts proclaiming the wearer a “Feminist” in big block letters. Ironically, the shirts were most likely made by women in developing countries who are paid next to nothing.

While displaying these shirts in stores for the public to see and buy might stimulate some normalization of the word “feminist,” companies selling the shirts otherwise do nothing to support feminist causes. The corporations ultimately exploit the hard and painful work of a centuries-long movement to sell merchandise.

In Pepsi’s short-lived ad from last spring, Kendall Jenner miraculously mends centuries of police brutality by handing an officer a Pepsi to the soundtrack of “We are the movement, this generation.” Pepsi revoked the ad after backlash from the Black Lives Matter movement and from people like Bernice King, Martin Luther King’s youngest daughter. King took to social media with photos of her father’s interactions with police, and an accompanying Tweet: “If only Daddy would have known about the power of #Pepsi.”

While Pepsi immediately apologized and pulled the ad, it is inevitable that corporations will continue attempting to entice Generation-Z under the guise of supporting civil rights.

After all, we are the first generation to grow up with an African American president and legalized gay marriage. However, these changes were brought about by older activists, not activists from our generation.

Associating activism with young people, who are often thought to be ill-informed, impulsive, and lack critical-thinking skills, trivializes social movements by labeling activism as “trendy.” What I saw at the Women’s March in Oakland was the result of many generations’ hard work; it was anything but trendy.