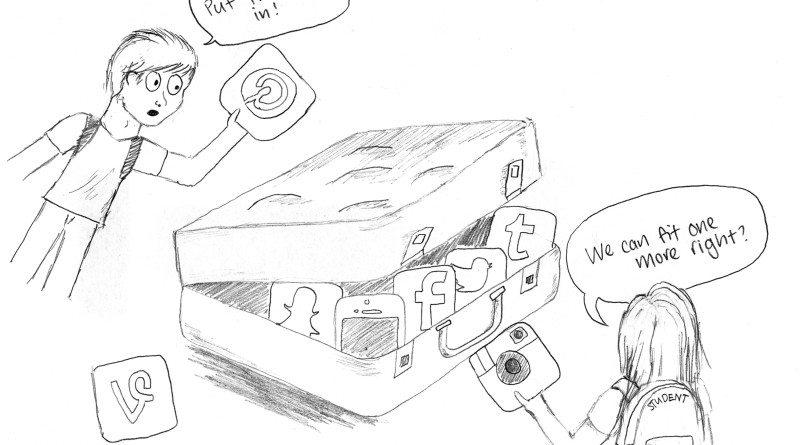 We, as functioning members of society, are defined by our connection to the world around us. In this day and age, that connection is manifested through two very different sources: the Internet and human interactions. The general trend of teenagers choosing the Internet over human connection is seen as an epidemic to many. Is this the root of the problem of our society’s reliance on technology?

Studies and surveys, such as the one recently done by CNN, show that teenagers spend countless hours on the Internet, whether it be scrolling through social media, playing video games, or clicking on links to various forms of online content. Here at The Olympian, we are both aware of the problem and recognize that many of us take part in excessive media consumption.

We conducted our own survey, and the results were unexpected. CNN’s survey concluded that teenagers spend around nine hours a day using media, whereas our results said that CVHS students spend about seven. These results brought up an issue that The Olympian finds to be the true cause of excessive Internet use in teenagers: teens are not aware of how much time they spend online and on their phones.

It’s no longer a matter of if teens use too much media, it’s whether or not they are teaching themselves to have the mental discipline to prioritize and make conscious decisions. If uncontrolled media usage is disdained but not combated, what can be said of the teenagers who don’t see Internet overuse as a problem? Media is not harmless. To be aware of the problem but not make a conscious effort to combat it is irresponsible.

People of all ages are polarized towards the never-ending content of the internet. Teens who never go outside, don’t spend time with their families, and cannot function without technological devices are typical stereotypes. But what is it about the Internet that makes it so compelling? What if this defining characteristic of our society was not seen in such a negative light?

The Internet offers an endless wealth of knowledge that is keeping our world more connected than ever. We at The Olympian see the value of connecting with the people around us through human interaction, but other forms of connection are just as valuable. Social media is a platform built on making and reinforcing friendships via the Internet. News posted online reaches broader audiences and offers multiple points of view in the same set of search results, therefore keeping more people informed about their communities. Teenagers are more aware of social issues, exposed to different cultures, and bring their perspective of the world to others. To get the chance to be a member of the international community makes you so much more than a small town kid.

Media represents the constant need for humans to be connected. We at The Olympian see the value of connecting with the people around us through physical interaction. We also recognize that media plays a substantial role in keeping teenagers informed, linking them to the rest of the world.

Like with anything in life, striking a balance is key. How you spend your time is your choice, but in the end, the Internet will always be there. Relationships with people are harder to develop but well worth the effort.

One thought on “Media overload: How much connection is too much?”