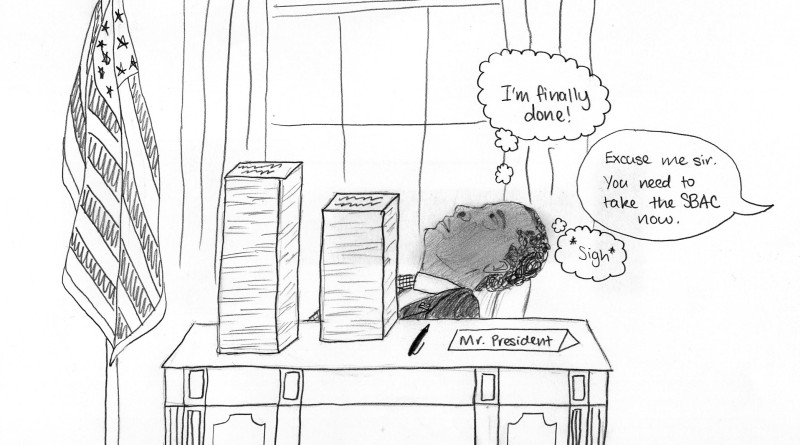 President Barack Obama has announced that in-school preparation for standardized testing would be reduced to two percent of classroom activity. We at The Olympian agree with this decision.

An argument that was made in Obama’s short video was that time spent preparing for testing could be used to learn how to play an instrument, acquire new hobbies, or learning other materials.

In the state of California we already have reduced testing, but for other states, this can be a big change. The problem we see tends to be with the quality of the tests. Many students and teachers agree that the tests do not accurately reflect learning or the potential of the students. In addition, many students don’t take standardized testing seriously, adding on to the problem.

We believe doing away with all standardized testing is not the solution. Standardized tests do set a bar for students to reach, and can be seen as good goals to work towards. In addition, the tests serve as a basis for general learning, which, if done efficiently, can be effective.

Some possible solutions to this standardized testing struggle can be to localize the standardized testing. Different areas learn at different paces or learn different materials, so it would be a large improvement. For example, if instead of a national test, the Bay Area had have its own exam, and other large regions could have tests suitable for the schools specifically in their areas.

Another solution is to combine all of the standardized tests into one large test that would replace the STAR test, the SBAC, the SAT, and the ACT, along with other standardized tests. This allows for students to prepare once for the test, and it is very likely that it would be taken more seriously by the students, because the tests wouldn’t be as common.

At The Olympian we agree with the president’s new guidelines, because until we fix the standardized test subjects, and make some much needed adjustments, the exams take away from classroom time. The time used to prepare for the test could be used for students to learn new languages, play sports, discover new hobbies, and give teachers more time to teach their students useful information.