Westboro Baptist Church, I am ashamed of you. Here you are, protesting at military funerals and calling yourselves good Christians. Have you not read the Bible? You’re supposed to “love thy neighbor,” not defile the ceremony to grieve their deaths.

The Westboro Baptist Church has been protesting against homosexuals since 1991. They actively continue to protest with malicious signs at military funerals under the guidance of Fred Phelps, whose family forms the largest portion of the group.

You are an embarrassment to me, and to all Christians who know that what you’re doing is wrong. You asked for the publicity, and you got it.

Many people like me would say that when you all die, we’d be glad to protest at your funerals, even though it would be stooping to your low level. I would be willing to bet that God disapproves of your behavior, as well as the majority of people who know about you.

While I agree that you have the right to protest for a cause you believe in, and that you should always be allowed your freedom of speech, have you no class? No decency? You are terrible people and a disgrace to all mankind. 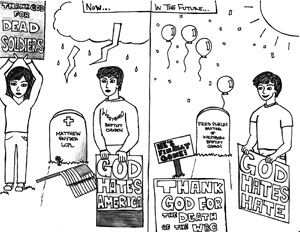 These soldiers whose funerals you have been protesting at—tormenting their families with your hurtful slogans that God hates them and you’re glad that they’re dead—these people gave up their lives for our country. The country you live in. The country you call your home.

Freedom of speech is very important to all Americans, but the least you could do is protest away from the ceremonies that honor the bravery of the soldiers who died for the country. These funerals aren’t only for your intended targets either! Yet, you have no sense of dignity or courtesy for yourself or these people and their families.

What’s more, the Supreme Court ruled in favor of your obnoxious rallies! Upon hearing that, I was stunned. The case went through, eight to one.

To the sole dissenter of this case, Samuel Alito, I applaud you. You realize that the soldiers have been fighting for the country you love, voluntarily giving up their lives for the purpose of making sure our country is better off. I congratulate you on your clear thinking; you see that these people should be treated as heroes, not as victims of vicious protests.

To the soldiers who courageously died for the United States, I hope you all rest in peace. Thank you for being there for us.