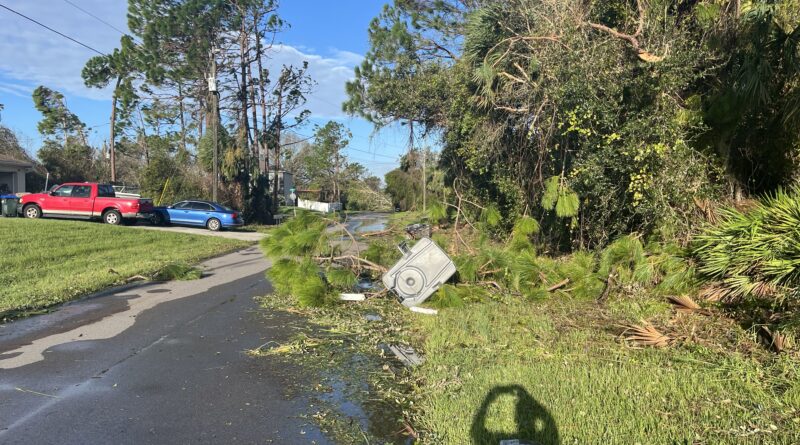 Up to 100 miles per hour winds shattered glass and toppled trees on Sep. 28, 2022 as the much-anticipated, near-category five storm Hurricane Ian made its home in southwest Florida.

“We had over 100 miles per hour sustained winds for over five hours,” recalled Douglas Paxman, uncle to Olympian editor Drew Paxman. “I had a tree branch hitting my house. And the winds were howling. And the house was shaking. I thought my roof was going to be flying off at any time.”

This was the first hurricane that Paxman, who lives in North Port, and his family have experienced since moving out east in 2019. When it was safe, Paxman and his family were able to relocate from North Port to Miami. They plan on venturing back to their home in a few days time, when the electricity in North Port turns back on.

“I consider myself lucky that we survived,” he explained. “A lot of homes were actually destroyed, damaged and flooded, and people had to be rescued by boat from their homes.”

In addition to leaving southwest Florida homes destroyed and communities in ruin, the storm has claimed over 100 lives.

“It’s likely to rank among the worst [hurricanes] in the nation’s history,” remarked President Joe Biden in a press conference on September 30. “It’s going to take months, years to rebuild.”

AP Environmental Science teacher Melissa Kindelspire has family that live in Florida, although they were not in the direct path of the hurricane.

“They did have to empty their pool before the storm and then watched as it filled back up again with rain water overnight. If they hadn’t drained the pool to make room, their yard could have flooded which may have gotten into the ground floor of the house,” she said.

When asked how climate change could relate to the severity of the hurricane, Kindelslpire explained, “The increased air temperatures increases evaporation as well as the water temperature of the oceans.” She added, “We do know that warmer temperatures usually cause stronger winds and more rainfall. Climate change also causes sea level rise.  This makes storm surge a much bigger problem and increases the amount of flooding.”

But despite the devastation, the lives lost, and the looming reminders of climate change, some Floridians are coming away from these trying times with a new outlook.

Florida Governor Ron Desantis visited Pelican Alley in Nokomis on October 6, the day the waterfront restaurant reopened to the public for the first time since the category four storm passed by.

He rhetorically asked, “How many other places in this country would that happen?”

Paxman, on the other hand, is simply relieved that he and his family are alive, and that the damage to their home is “minimal” compared to that of others. In addition, Paxman noted that the hurricane had one unexpected positive outcome: “If anything, the storm brought the neighborhood together,” he concluded.