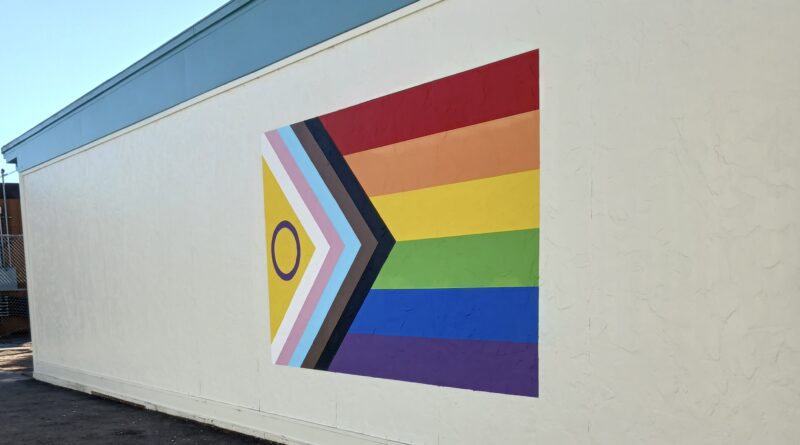 What was supposed to be a normal school board meeting turned into something much more. On Sep. 14, protesters gathered outside the district office to protest the murals being painted around CVUSD campuses.

CVHS seniors, Karissa Chu and Rebecca Ireland (an editor for the Olympian), have been working to implement murals of the pride flag in schools all over CVUSD, which has garnered opposition from other groups of people.

The murals feature a progress pride flag, meant to represent the LGBTQ+ community as a whole. A group known as “Bay Area Against Mandates” saw this and set up a protest, claiming that school should be about math, English, and science. Another group of people, mostly consisting of people within Castro Valley Unified, went to the district office to counter the protest.

The school board meeting itself didn’t have the pride murals anywhere on the agenda, as it was already approved by the school board in February 2022. However, when it came time for public comments, all 35 comments were related to the mural project.

Chu addresses the opposition her project had gotten during the meeting.

“It’s maybe ignorance and just a fear of things we don’t understand which I totally get. I know there’s a ton of things that I don’t understand, and I would view them as strange and unfamiliar. I’m just saddened by the fact there are so many people who still hold these kinds of beliefs,” said Chu.

“I think home with parents who love their children unconditionally would be the best place to start. Public systems don’t make things better people do. So whatever hardship that you’re facing, whether it’s represented in the progress or not, because there’s a lot of other people with other hardships. In life, you just stick with the people who love you unconditionally,” said Danielle Perreria. She was protesting against the murals, feeling that it would force the ideas of the LGBTQ+ community to other people.

“My rights and other parents rights have been violated by Vannoy Elementary School openly painting a flag that is a symbol of sex. The flag subjugates students to official promotion and inclusion of only one lifestyle that violates students freedom of religion.” said Heather. She is a parent of a child at Vannoy, and had to tell him that he was too young to understand.

“My personal view I’m happy to see the support of the community, especially the students at the high school, who are out here and supporting the members of our LGBTQ plus community. It’s absolutely incredible to see that support, a real good representation of what our community believes in,” said junior and ASB school board representative Quentin Hansen.

Despite the protests, CVUSD has gone ahead with the project, adding the murals to many schools around the district. CVHS has a pride flag mural next to the weight room at the auxiliary gym and another located at the entrance of the school.