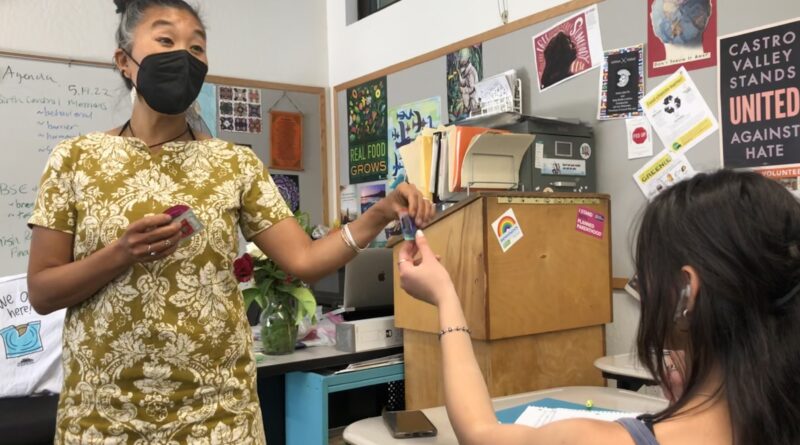 Health teacher Erika Ikemoto shows students a condom, though CVHS does not distribute them.
Highlights News
May 29, 2022May 29, 2022 Zoe Dorado 0 Comments

CVHS is one of only four out of 31 Alameda County high schools which doesn’t provide reproductive health services at its health center, according to the California School Based Health Alliance.

In other words, if CVHS students needed to access contraceptives, such as condoms, they would not find them anywhere on school campus.

“I would love to see us, specifically with condoms, have them more readily available and accessible to students because condoms are almost universal in most heteronormative relationships and heterosexual relationships with gay men,” said junior Bibi Lazares from the Women of Color for Change Club (WOCC).

Instead, the on-campus Wellness Center directs many students to off-campus resources to access birth control such as condoms. This brings up the question: What is CVHS’ role in promoting sexual health, including the distribution of contraceptives, for students?

“There is no policy in our district regarding distribution of contraception. And really the only place that it’s really discussed is in health classes starting in elementary school on,” said CVUSD School Board President Dot Theodore.

According to the California School Based Health Alliance, an official school based health center (SBHC) would provide primary care like a medical clinic and would be “typically staffed by nurse practitioners, nurses, mental health providers, as well as part-time physicians and medical students.”

Instead, as explained by Marian Meadows, the district’s behavioral health coordinator, the Wellness Center, as it currently stands, “partners with the CVHS Health Office and ninth grade Health teachers for sexual health education, and provides referrals to community agencies for sexual health resources and counseling as appropriate.”

These “community agencies” include Hayward’s Planned Parenthood, a sexual health clinic, which students are often referred to when they ask for contraception from the Wellness Center.

While recognizing how Planned Parenthood provides resources for students, Lazares also recognizes how this can be inaccessible for many students.

“We have lower-classmen learning about sex in sex ed, holding condoms, touching condoms. I think that we always talk about Planned Parenthood in health class and we even look in health class to see where the nearest Planned Parenthood is. But those 14 to 16-year-olds—even up to 18—can’t drive and so it’s kind of out the way,” she said. “I think it’d be a better resource if it was somewhere close by, a clinic in Castro Valley that’s walkable distance. But not many students are going to have that privilege of going to their parents and saying, ‘hey can we go to Planned Parenthood? I need XYZ.’”

Other than Planned Parenthood, CVHS often refers students to the program Teen Talk, a youth health education program which is an “online resource developed by the California Family Health Council to improve the health and well being of young people in California by providing non-judgmental, accurate, and reliable sexual and reproductive health information and resources.”

“We use the program Teen Talk for a comprehensive sex education giving students the knowledge to keep their reproductive health safe and keep themselves safe mentally, physically, and emotionally,” she explained.

Ikemoto encourages her students to use the free services that are available to them through organizations such as Teen Source and Planned Parenthood.

“We always talk about Planned Parenthood because that’s the closest clinic, but then we also have Teen Source which is an online site where they can get all kinds of really great information. Through Teen Source they can get internal and external condoms sent to their homes even,” she said.

Ikemoto also noted that students have a right to leave campus during school hours to access sexual and reproductive health services.

“In addition,” Ikemoto continued, “we encourage them to always be talking with a trusted adult and be able to have these conversations, but the truth is not all students have a trusted adult in their life that they can go to freely and ask what they need,” she recognized.

Lazares recalled a conversation she had with her parents.

“We’ve talked about what lines are crossed and what lines are blurred when it comes to parents and what they choose to expose their children to and what already the school has in providing those kinds of health services,” she said.

“I think the biggest thing about sexual health,” she continued, “is that it affects us all as students and it’s really important to have available resources that are close by. Being sexually active is a choice and I think it’s really important that if you’re able to make that choice you’re able to make well-informed decisions and have resources that are regularly accessible to you.”

CVHS doesn’t have a school-based health center which would provide medical professionals. Still, however, there is a workaround.

“There are ways that we can get condoms in our Wellness Center free of cost to the school district and start there, where we can at least have that resource for students. The county, through the Public Health Department, has programs that will send free condoms to our high school for distribution. That’s something that we need to dive into and figure out how to do,” Theodore said.

Torpey acknowledged the school’s responsibility in expanding services, such as those that pertain to sexual health.

“CVHS has a responsibility to provide access to information to health care resources,” he said. “CVUSD’s consistent commitment to expanding that to actual health care services is just another example of our Board’s dedication to student and community wellness. There are many laws protecting students’ who are pregnant and their right to an education.”

According to Meadows, the Wellness Center is already working towards improving its services.

“The Wellness Center is currently exploring opportunities for more staff training around sexual health and sexual assault prevention to better support students,” she said. “Also, we are committed to continuing to learn about LGBTQ+ health to provide affirming counseling and support.”

Lazares agrees that such steps are important. But she sees concrete steps like offering condoms as a vital way of supporting the immediate needs of students and promoting their sexual health.

“[Condoms are] honestly one of the best options in not only preventing pregnancy but also preventing the spread of infections and diseases,” she said.

Additionally, Lazares stressed the importance of having other forms of contraceptives such as dental dams, access to pregnancy tests, and anonymity for students so they can grab these resources from a “discrete place,” whether that be in the Wellness Center, bathrooms, or the health office.

Theodore noted that if CVHS were to access free condoms through the county’s Public Health Department, there would be “some recording requirement to the county, but not names of students.” She explained how “the county is interested in collecting demographics of people who are utilizing the free resources.”

As the ACLU affirms, California has “some of the strongest laws in the country” that protect students’ rights to access “confidential medical services” including “reproductive and sexual health services.”

“When I first was elected, one of the first things I wanted to do was to bring a school based health center to our school district,” Theodore said. “I was part of this Wellness Committee and we were working with Kaiser at the time. We were really hopeful that they were going to put in a bunch of money and help us create this Wellness Center – and that Wellness Center being a school-based health center – in addition to mental health services, also being able to prescribe contraception, sports physicals, immunization, and other basic health care things.”

She continued. “Unfortunately Kaiser wasn’t able to do all of the things we’d hoped that they’d do, so instead we focused on creating the Wellness Center that exists as it is today where we are able to house support groups and counseling and therapy and those kinds of things.”

“But we haven’t given up on bringing a school-based health center into our high school. Hopefully in a year or so or however long it takes, we’re going to keep pushing and moving that forward because it’s important to make access to those services easier,” she said.

Editor’s note: Read the follow-up article, CVHS discusses its culture around sex. Excerpt: “Even if CVHS does provide condoms or other forms of contraceptives in the Wellness Center or elsewhere on campus, many students like Lazares believe there is still more to be done regarding the way the CVHS community discusses sexual health.”