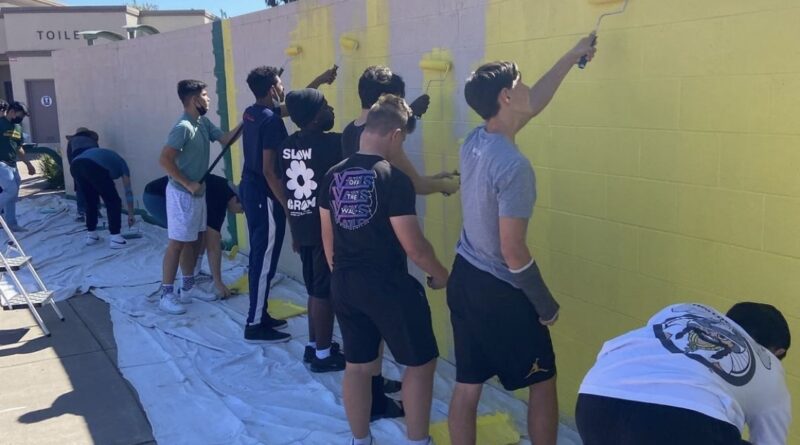 Everyone experiences setbacks at some point in their lives, both big and small. Progress made can suddenly be reversed. But it is through trial and error that people really learn and persevere to come back even better. This was the case for some Trojans in March.

While students embarked on Spring Break Friday night, March 25, three CVUSD students, from both CVHS and the middle schools, graffitied the Trojan Stadium and Center for the Arts. The vandals were caught mid-act and stopped by the Alameda County Sheriff’s Department, according to ceramics teacher Jennifer Jervis.

A main target of the vandals was the 65 by 8 foot brick wall on the home side of the stadium. This defacement to campus occurred just two days after the football players assisted Jervis in painting a yellow background for an upcoming mural.

“I feel disappointed,” commented Jervis. “It’s a lot of hard work to put things together. The students involved are proud of the work that we’re doing. It’s just more work and more expense for us to have to fix it.”

On the morning of March 26, immediately after the wall was defaced, the Trojan football teams came to school to restore the murals. A layer of white was affixed to conceal the bright red graffiti. The football players were in a time crunch because a track meet was to take place that afternoon. They hoped to complete restorations before people arrived.

“Everyone who was early for the track meet saw the graffiti,” said junior Finn Chilton, who participated in painting the mural. “We take a lot of pride in our stadium and how people view us, and this made our school look bad.”

After the white paint had dried, the football players returned later in the week to camouflage the graffiti with yellow. In total, it cost around $250 to reverse all of the damage that had been done.

Although a setback in its progress happened, the stadium’s mural has been completed with ease. Instead of white patches on the wall, visitors can marvel at a logo that celebrates all the sports at our school.

“The takeaway for CVHS is there will always be individuals within and without our community who will make bad decisions that harm others, sometimes directly or indirectly,” explained Principal Blaine Torpey. “How we respond to harm is what truly defines us. CVHS didn’t throw its hands up and give up. We pursued the truth, built accountability, and came together as a community to heal the harm.”