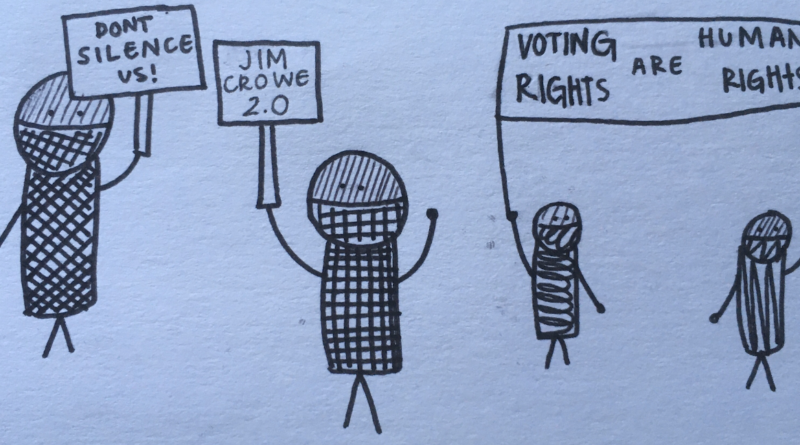 Georgia passed a voting law on March 25 that would require new voter identification for absentee voting, limit the use of drop-in ballot boxes, allow state interference in local election boards, and take away the ability for people to receive food or water while in line to vote.

The response to this so far has not been positive; lawsuits have been filed claiming that these restrictions are unconstitutional and add too many restrictions for voting. Opponents believe the law targets people of marginalized communities and makes it harder for them to cast their votes.

In many more Republican-led states, there is a large push to restrict voting rights and methods. These new bills and laws are “Jim Crow in new clothes,” according to Senator Raphael Warnock, and have sparked a lot of outrage throughout America, especially in communities where voting rights have been historically restricted.

“Their restrictions are not about protecting from voting fraud but limiting people from voting. It is basically a solution to a problem that doesn’t exist, and at its worst and most realistic it is disenfranchising groups from voting, which I think is disgusting,” said government teacher Mark Mladanich.

Nationwide, Democratic politicians are trying to pass a bill that expands voting rights to citizens. The HR1 bill includes parts that will allow for national guidelines for voter registration, force future presidents to disclose their tax returns, and allow for a more transparent and accurate voting system. The bill would help allow people of marginalized communities to have more voting access and create a voting system that would be more fair and have more accurate representation of the people.

“I believe the right to vote is essential to American democracy. In such polarizing times we must make sure everyone is heard. In my opinion it should never be ‘the people who are in power’ rather putting the people in power,” said sophomore Bibiana Lazares.

Republican senators, however, are trying to block this by performing a filibuster. A filibuster is a tactic used in the U.S. Senate to prevent voting on a measure by extending the debate. They are adamant to not let the voting right access be expanded anymore than it already has.

Marlis talked about his distaste for filibusters because every issue should be talked about, and we should not be trying to restrict any type of conversation about anything. Democratic senators are going to have to overthrow the filibuster in order to get the HR1 bill to pass.

“Our country was built off the backs of those whose voices were suppressed. It is now up to all of us to build the America we want to live in, but that could never happen without our vote,” said Lazares.