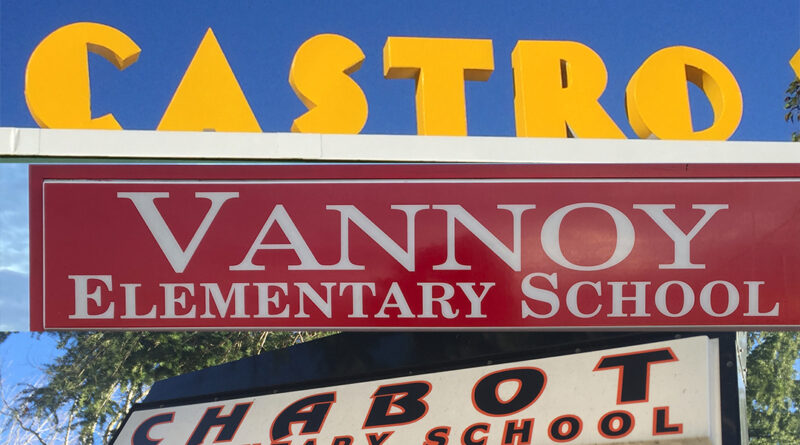 Castro Valley’s 19th Century settlers, mostly men and European American, inspired the names of most of the town’s schools, an Olympian survey has found.

“These schools belong to the community and therefore today’s Castro Valley residents should be able to have conversations about their values and how those values are reflected in public spaces,” said John Christian, manager of Hayward Area Historical Society’s archives.

Many of these settlers made a significant impact in the community that’s still visible today. The schools that carry their names have independent origins but now all belong to Castro Valley Unified School District.

An explanation of the schools’ names and a summary of their histories follow:

Vannoy Elementary School was named after the VanNoy family, who used to own a farm many years ago in the area.

“Last year we had a Mr. David VanNoy stop by and introduce himself,” reported Principal Doris De La Torre. “His family used to own a farm many years ago in the area.  According to him, the street was named after their family and then the school was shortly thereafter.”

Vannoy was opened in September 1956 to accommodate the growth of the upper Center Street area. Al Tingstro was the first principal.

Proctor Elementary School was named after John Proctor, who was an early pioneer and was born in 1812 in Lancaster, England. He sailed to the United States at age 18 and landed in New Orleans in 1830. By steamer, he boated up the Mississippi River to farm in Illinois. In 1853 with a wife and three children, he came to San Francisco via the Isthmus of Panama. Looking for farmland, he bought 80 acres in upper Castro Valley and raised grain and fruit.

Stanton Elementary School was named after Michael Stanton who was an early pioneer of Castro Valley. He worked with James Strobridge for the Central Pacific Railroad as manager of the construction crews. Upon completion of the transcontinental railroad, the two formed a business partnership. Mary Stanton was his wife and settled with him in Castro Valley in 1872. The family’s legacy is all over Castro Valley; Miguel, Santa Maria and Anita avenues were named for their children.

Jensen Ranch Elementary School was named after the Jensen family. The Jensen family has resided in the region since 1867 when Erich and Jens Jensen purchased 450 acres of grazing land in the hills east of the valley at $7 an acre. They were natives of Denmark. The Jensens had orchards and wheat fields, and also raised cattle, pigs, and poultry, making a homestead in eastern Castro Valley.

Chabot Elementary School was named after Anthony Chabot, who was a French-Canadian forty-niner turned hydraulic engineer. He made a fortune in the goldfields in 1852 when he helped to invent the hydraulic mining cannon. He earned the title of “father of hydraulic mining” and planned the dam on the edge of Castro Valley that now bears his name.

In 1874, he began the construction of Lake Chabot, which was called San Leandro Reservoir back then, as a solution to Oakland’s water shortages. Today the lake has a plaque honoring Chinese workers, who dug and dynamited through 1,438 feet of the earth, laboring for 18 years.

“There was so much anti-Chinese discrimination, although there were a lot of Chinese workers in the area. They would form anti-Chinese leagues who would go against the rights of the Chinese,” said Christian.

Castro Valley itself, and subsequently Castro Valley Elementary School and CVHS, are named after Don Guillermo Castro, who was a Mexican soldier and surveyor born in 1810. He was given two land grants by two Mexican governors of California, which were made up of 27,000 acres. For two decades, Castro fattened his cattle herds in the green fields of his valley. Plagued with drought, squatters, and appalling luck at the gambling table, Castro sold huge portions of his holdings to immigrants arriving at the beginning of the Gold Rush.

Although not confirmed, Marshall Elementary School might be named after Gold Rush figure James Marshall.

“One theory that was shared with me is that the school is named after Marshall Street. And many of the schools in Castro Valley are named after the street they are on,” said Marshall Elementary School Principal Yvonna Rogers.

Marshall’s building period covered the late 1940s and early 1950s. When this school was new, it only consisted of one building. Jim Kerr served as a part-time principal.

Palomares Elementary School’s name originates from the word “Palmyrs,” which was a Spanish name meaning “The City of Palms.” Prior to July 1874, it was changed to Palomares, meaning “white dovecote.” A dovecote is a structure for birds.

The first Palomares School was built in 1868, on land which was originally part of Ranch San Lorenzo, a Spanish land grant owned by Guillermo Castro. The rancher sold the site for $60.50 to the district. It was a one-teacher school. The building was later leased to the Chanticleers theater group in 1958. However, on July 7, 1976, the building burned down. Throughout its history, many people feared the closing down of the school from the lack of enrollment. Despite this, Palomares remained open, with the new building built on the site.

In the 1890s, a rancher named Arthur Marner donated about two acres of land for the first Independent School. Many ranches in both the Cull Canyon and Crow Canyon areas donated money to buy lumber for constructing a school building, horse barn, and an outdoor toilet. The name comes from the hard and independent work of the ranchers.

It had two rooms, an outdoor toilet and a well to draw water. Most of the children rode their horses to school. The present Independent Elementary was built in 1953.

The Castro Valley community, which was once nearly all Caucasian, has now become much more racially diverse. But most schools still carry the names of white men, and none specifically honors a woman.

“I know of no reason to change them. But that is something for the local community to decide,” said CVHS history teacher Brad Schoenberger.

“I think the names of the schools should stay as they are. There are many important people in Castro Valley, but it is too late to change them,” said Lorge.

Editor’s note: The Olympian welcomes community comments on this topic. Please write yours in the comment section below.