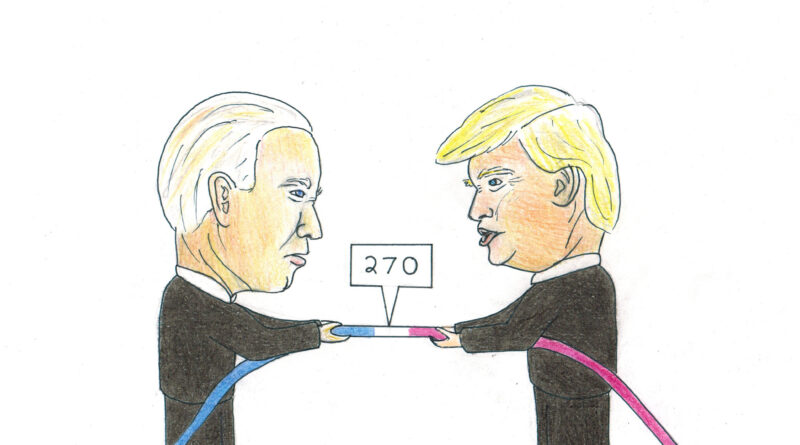 Ever since Election Day on Nov. 3, the entire country has been nervously waiting to see who will become the next president, Joe Biden or Donald Trump. CVHS students too, are anxiously following the news and awaiting the results of the 2020 presidential election.

“I’m kinda watching the election, mostly not very closely (at least today) because I’m trying not to stress. I really want Biden to win, and I’m super nervous because there is a lot on the line in terms of good things for people’s rights and for this country,” said junior Genevieve Habelski.

“Since reports began flooding in on Tuesday, I have been nervously yet excitedly anticipating the results. I see this election as a pivotal moment in history, a choice between order and unrest, understanding and animosity, statesmanship and demagoguery, that is, Biden and Trump. As such, I desperately hope that Biden will win and believe that he would in a fair election without voter suppression. Furthermore, the election excitement makes me impatient for the election when I can finally cast my vote,” explained senior Rafi Overton.

Senior Paul Friesen expresses his frustration with the whole situation, and the president’s speech already claiming himself the winner.

“It’s frustrating that we can see Biden 3.5 million votes ahead in the popular vote, with only a few percent of ballots left to be counted in a handful of states, yet still not know who is going to win the presidency. I’m obviously frustrated though not surprised that Trump already called the election, but I’m also upset that, while Biden is saying we need to wait until all the votes are counted, it seems like at times he is also hinting that he has already won. I’m again frustrated but not surprised that our president is already taking legal action against states before the results of the election are even known,” said Friesen.

Friesen is not alone in his expressed disappointments of both candidates. Senior Benjamin Chen voiced similar concerns.

“I have been feeling extremely stressed. It’s horrifying juggling your decision on the lesser of two evils. Both candidates are not perfect but at least with Biden, I can stop worrying about the potential infringements of rights in the LGBTQ+ community and other minority groups, which most white, heterosexual, cisgendered, men cannot sympathize or comprehend,” said Chen.

Although Biden seems to be in the lead at the present moment, some students still voiced apprehension that this could quickly change.

“I already expected Trump to win, like way before all this happened,” said freshman Ian Choo.

Assuming that Biden is victorious, senior Ben Theodore worries that “Trump will not accept defeat and will not give up power of the presidency.”

Despite all this, students are optimistic about the end results.

“I hope Joe Biden will win. One repeated message from his campaign that he has had that has resonated with me is this: ‘We are campaigning as Democrats, but I will govern as an American president.’ I find this in stark contrast to the president’s rhetoric, where he tears down groups of people, even insulting entire states,” explained Friesen. “While it remains to be seen if Biden can follow through with his message, I want him to win because he, at the very least, is interested in unifying the country.”

5 thoughts on “Trojans tense as election fight drags on”