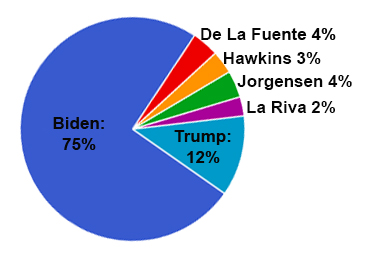 In order to formulate an accurate representation of CVHS student’s political views, The Olympian constructed a mock ballot and emailed it out to the CVHS students. The newspaper received almost 200 responses.

The mock ballot included many of the propositions that will be voted on in November with a brief explanation of what the prop represents. The most notable of our inclusions into that ballot however is of course, the highly acclaimed presidential election.

“I would vote for Joe Biden because he will enact laws to protect women and the environment,” said senior Hannah Pilgrim.

“My choice for president was Joe Biden because I believe he is a more reliable person to have running our country,” said Alexis Park, junior.

However, Trump has devoted support from some students.

“I support Trump’s policies … I like how he has strengthened our borders and cracked down on illegal immigration,” explained Chris Dykes, a junior. “I support his police reforms… and he has helped us in California by giving a larger amount of money to help with the cleanup of burned forests and towns.”

Prop. 15 would increase property tax on large businesses to raise up to $12 billion per year for schools and other government programs.

About 65 percent of students voted yes on Prop. 15.

“Yes for Prop. 15 because we should have more money for schools so that they can improve our education. The better our schools are, the better run businesses will be later on,” voiced Eryn Graffam, a junior at CVHS.

Nonetheless, 35 percent of students still voted no on prop 15.

“No on Prop. 15 because I feel like small businesses are already doing badly enough with COVID-19,” asserted senior David Ciovbanu.

About 55 percent of students voted yes on Prop. 16, with 45 percent opposed.

“No on Prop. 16: the choice of an employee or student should only be based on their character and skill. Discrimination is discrimination no matter the reason. There should not be a double standard,” argued Tiana Kessee-Johnson, a senior.

About 69 percent of CVHS students voted yes on Prop. 18, while 31 percent voted against it.

“I voted yes on Prop. 18 because teenagers who work and pay taxes should have the same representation as someone with a job and taxes and is older. They would have their own beliefs in who and what they vote for,” claimed junior Anthony Yeung.

“No on Prop. 18. While 17 is very close to adulthood, I think that non-adults shouldn’t be voting. While it may be good practice for new voters, the results have the potential to be skewed,” said senior Colby Bettis.