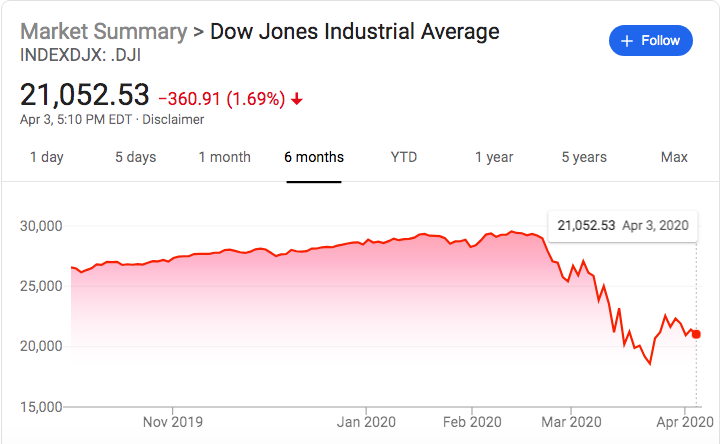 COVID 19 has caused a big economic crash since Feb. 20, with stocks dropping about 25 percent in value over a five week period. Unemployment has jumped from 3.5 percent to 5.5 percent in that period, an increase of 63 percent and a record 3.3 million people filed for unemployment benefits.

We all know about the new pandemic of COVID-19, more commonly known as Coronavirus, and how we are supposed to maintain social distance, wash our hands and avoid crowded spaces. But how does a virus like COVID-19 affect the American economy and the global economy?

“People aren’t going out and spending money on the things they usually would. Even if it lasts a couple months, it will still be devastating in terms of job losses which would further the recession we are in,” said economics teacher Eric Bahm.

We can see that as recently as March 17, the Federal Reserve announced it was going to cut the federal funds rate by 1 percent to a range between 0 percent to 0.25 percent, which would ultimately lower the interest rate to consumers. In addition to low interest rates, we can also see that gas prices have been dropping in California to approximately $3 per gallon, compared to over $4 per gallon six months ago.

Although Congress and Trump agreed on a $2.2 trillion stimulus package on March 26 to try to jump start the economy, time will tell whether the payments to businesses and to most American workers, who will get $1,200 each, will be enough to lift up the American economy to where it was pre-COVID-19.

“The very loose fiscal and monetary policies that the government is partaking in is creating a huge deficit and will leave us very little room to maneuver in the future,” said economics teacher David Roth-Rossi.

With more and more of America’s working force being sent home as more jobs are considered a “non essential activity,” we have seen an increase in aggregate demand as people start to stockpile and hoard their supplies. Currently, the most desirable supplies are toilet paper, paper towels, hand sanitizer and cleaning wipes, followed by bread, canned food, beans  and pasta products. Grocery stores are limiting quantities of dried and canned goods, cleaning supplies and paper products – if you can find them!

In February, the US economy looked very different, with low unemployment rates, low tax rates, and a very foreseeable future growth for the U.S. economy. The global economy may not be as strong as the U.S. economy, but it has been holding its own for the time being. However, the current pandemic is creating economic havoc around the world as stores and restaurants close, airlines reduce their flight schedules and manufacturers shut their factories globally.

As a result, COVID-19 and the government’s economic response to it is propelling the economy towards a deeper recession. This is best seen through changes in the stock market, which saw the Dow Jones Index dropping 2,300 points just in March alone, the biggest drop since the 1980s.

The true economic impact of COVID-19 will only be seen once the pandemic has ended and global economies reopen to pre-virus status. It’s too early to tell how the U.S. economy will fare as manufacturers may struggle to fulfill orders and many small businesses and entrepreneurs may be forced to shut their businesses for good.

However, one thing is for certain: COVID-19 will undeniably cause a detrimental impact to the near and long-term future growth of not only the U.S. economy, but the world’s economy as a whole.

One thought on “Pandemic crashes economy”