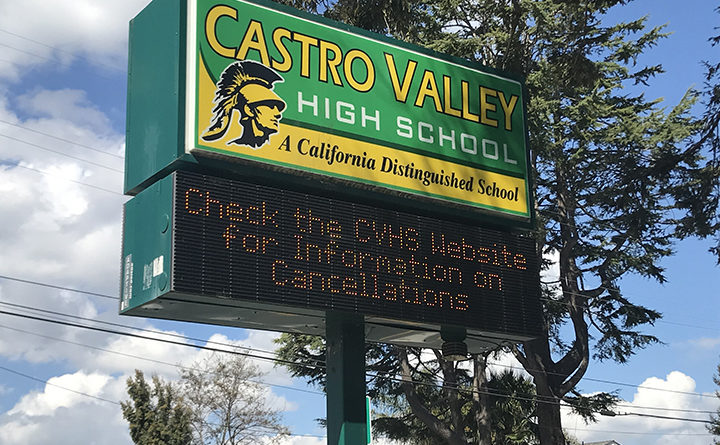 Castro Valley Unified School District’s board of trustees voted unanimously in an emergency meeting on March 13 to close all campuses to limit the spread of the coronavirus. The closure would have remained in place until at least April 1. However, Gov. Newsom imposed a statewide shelter in place order for an indefinite period of time, which could last beyond the original date.

“Closing schools is never an easy decision,” said Superintendent Parvin Ahmadi in an email to parents. “However, in an abundance of caution, we have made the decision to suspend in-school instruction for a period of time due to the concerns over coronavirus.”

Teachers and students have switched to distance learning during the closure. Because schools have not stopped instruction, it is unlikely that the school year will have to be extended.

The closure could last until summer if the coronavirus continues to spread. Newsom recently predicted that “few, if any [schools] will open before the summer break.” At least one state, Kansas, has closed schools for the remainder of the school year.

Newsom has also issued an executive order to waive standardized testing for the school year. Additionally, AP exams this year will have a new format to accommodate students whose schools have closed.

However, many school districts across the country, including CVUSD, are having difficulties adjusting to distance learning.

“Please be patient with yourselves, each other and us,” wrote Principal Blaine Torpey in an email to families. “The idea of distance learning is unique and new to all of us.”

“It all just feels a little overwhelming to me right now,” said senior Abby Allen about distance learning. “I’m having a hard time staying motivated, especially since these sorts of situations seem to play right into my anxiety and depression.”

Some students were more optimistic about distance learning.

“The transition was not difficult, as many teachers had already been using Google Classroom,” said senior Philip Truong. “I like being able to set my own schedule for schoolwork.”

District officials have decided not to reschedule spring break. But if closures last until summer, highly anticipated events could potentially be altered or cancelled.

“I honestly expect graduation and prom to be canceled,” said senior Jennifer Tam. “I wouldn’t be surprised, but as a senior I would still be disappointed.”

Dozens of events have already been canceled. “It’s honestly really disheartening,” said Allen. “A lot of work that I and other students have done has seemingly gone to waste.”

The school district has also made packed lunches available daily to anyone 18 and under, including non-students, at Creekside Middle School, Castro Valley Elementary, and Stanton Elementary. Chromebooks have also been made available to students without computer access at home.

Many students support the district’s decision to close schools during the epidemic.

“CVUSD has basically been following the course of action taken by other school districts in the Bay Area,” said Truong. “They have responded well to the virus, considering the difficulty and magnitude of the situation.”