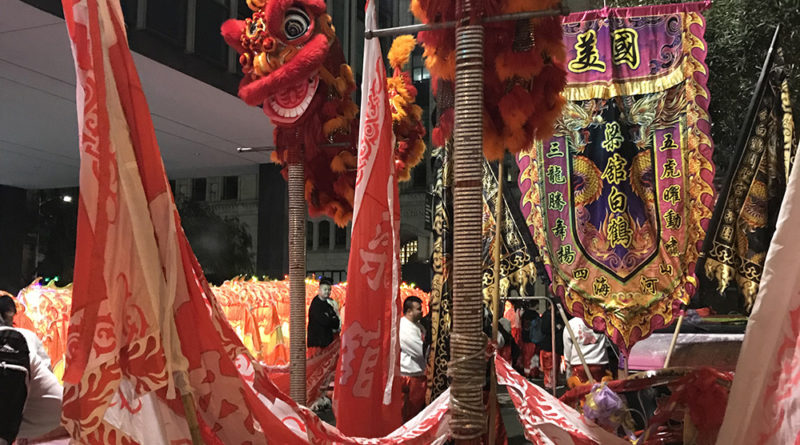 The bang of the firecrackers turned all heads to the lion dancers in the street. The crack of the drums signaled the marching bands were approaching. The cheering of the crowd made for a lively and festive embodying the atmosphere for the 2019 Chinese New Year Parade on Feb. 23, 2019.

“The symbolic color of red was everywhere. Gold colors decorating floats and costumes, represented what my culture believes will start a new year strong and wealthy,” described senior Haobin Guan about the festivities.

Chinese New Year, which traditionally takes place on Feb. 5, was celebrated in the Bay Area and on CVHS campus through a cultural diversity SOSPOP week and the annual parade in San Francisco.

Featuring major businesses, community organizations, and various Chinese cultural groups from the Bay Area, the parade was a hit. It also rang in the new Miss Chinatown USA and celebrated with the lighting of firecrackers along with the UC Davis Marching Band.

Overall it was a great celebration of the Lunar Year of the Pig and the symbolic beginning of new beginnings for the chinese community.

“Chinese New Year is the Chinese festival that celebrates the beginning of a new year on the traditional Chinese Calendar,” said Guan. “It is associated with several myths and customs that are represented through dragons and lions that are seen in the parade as well.”

The parade was broadcasted and was a popular activity for many volunteers and viewers. Floats such as Lucky, Recology, Bank of America, and the San Francisco Giants were included in the parade, readily greeting attendees.

Some students from CVHS attended the festival and parade. Many attending as volunteers were able to either represent their culture and be part of the parade.

“Helping sell the raffle tickets was fun. My friends and I took turns using the microphone to advertise in four different languages and that ended up attracting lots of people to our section of the festival. I’m really glad to be a part of the festival to promote Chinese culture in the United States,” said senior Christine Wei on her part in the festival and parade.

Chinese New Year was also represented at CVHS as well. On campus clubs such as DECA, Inspire, and DSLA held a dumpling making party in celebration for their week of SOSPOP. The event rang in new members to learn about the holiday and it’s meaning.

The annual Chinese New Year Parade in San Francisco was a great hit and a cultural representation of the celebration of the new year for the Chinese community.