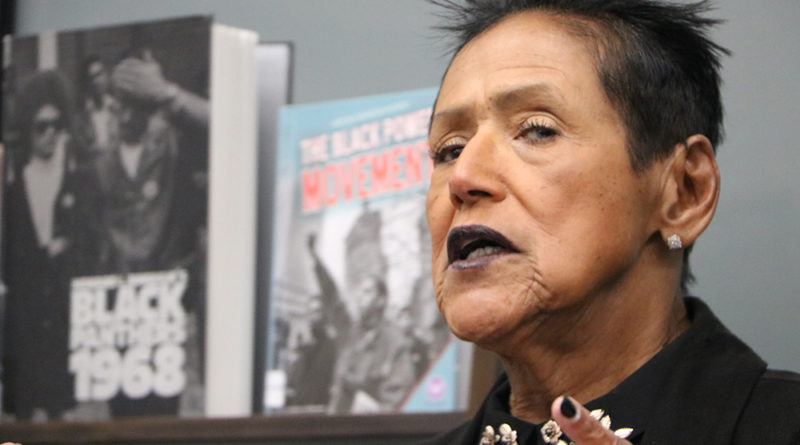 “They certainly attacked us. The Los Angeles Police Department formed their first SWAT team in response to us carrying guns. They brought in over 200 policemen, surrounded us with helicopters, and dropped bombs on our roof to attack us 11 people. Nine men and two women, all under the age of 22. We fought for five and a half hours. And none of us died,” explained former Black Panther Party chairwoman Elaine Brown in the CVHS library on Feb 13.

“What do we do? We just say ‘hands up, don’t shoot’ and hope they don’t shoot? We say ‘black lives matter’ and hope it matters to some guy with a gun strapped on him? We’re going to argue for 20 years in court while we’re getting killed?” asked Brown.

“Our purpose of guns was for self defense. But we began to de-emphasize the gun because people became afraid of the Black Panther Party. It was an organizing tool to show the people you don’t have to be afraid. You can stand up,” said Brown.
Instead, the Black Panthers put an emphasis on what Brown calls “survival programs,” such as their breakfast program. The goal of the breakfast program was to provide breakfast for African American children in impoverished areas so they would not have to go to school hungry.

“It started off as one chapter in Oakland and grew to 48 chapters around the country,” stated Brown. “We had chapters in states I didn’t even know black people lived in, like Nebraska. Or really Utah, but that’s another story…”

The purpose of the Black Panther Party was to organize a revolution to transform social constructs so that everyone’s needs were met, Brown said.

“The Black Panther Party recognized that our liberation could not be had while other people in the country were oppressed,” she said.

Currently, Brown is working on a housing project of 79 units in West Oakland to provide affordable housing for people of color. She wants to set an example to the youth.

“Let’s think to ourselves, what am I going to do for the rest of my life? Am I just going to fall in line and hope I get a little job somewhere? Or am I going to do something that’s really exciting for me that will make a change for the better?”

One thought on “Black Panther Elaine Brown comes to CVHS”