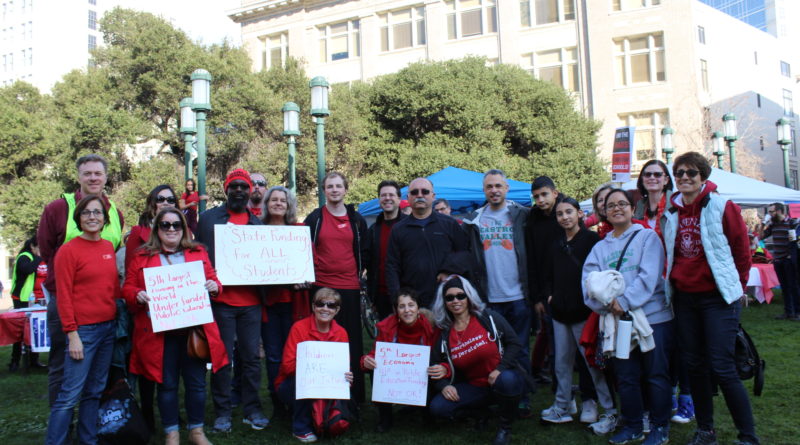 The plaza was overflowing, with more than 1,000 attendees, estimated an organizer.

“I think it’s a great turnout. I think people are starting to realize that we need to pay attention to our education to make sure it’s funded properly, ” said Liz Ortega, secretary-treasurer of the Alameda Labor Council, when asked about the overall attendance of the event. Ortega was the second to speak, enlivening the crowd with her frustration, energy, and determination.

“I’ve been to many rallies, rallies for wage equality, gender equality, gay rights, and much more. I’ve always understood why I was there, but something is missing here because I don’t understand why I am here today,” spoke Ortega. Her speech emphasized the ridiculousness in the United States having the 5th largest economy in the world, yet California being in the bottom five of state support to schools. She points out the irony in politicians speaking about the importance of education, while more and more teachers are unable to afford living in the districts in which they work.

“No more rallies. No more speeches. No more promises. We want what our children need and we’re going to get it!” roared the crowd as Ortega concluded her speech.

“When it comes to increasing funding in California, it cannot be a small district by district movement. My hope is that this event will be a movement of many to show the California Legislature that we need to fund schools at a fair level,” said Mladinich about what he hopes this event will accomplish.

Gary Howard, a member of the Castro Valley School Board of Education, agreed. “I think that it is a really good thing that teachers, administrators, school boards, and parents are here to try to make sure that we have enough funds for schools to run well, ” commented Howard.

The “East Bay Rally to Fund Public Education!” was initially organized by ten teacher unions, and since then has grown to about 20. Speakers at the rally ranged from presidents of school districts to leaders of teacher unions to politicians to students, most of whom were a product of public education and proud to be so. Throughout the two hours, the audience was showered with a multitude of messages, mission statements, demands for actions, and encouraging chants, but the overall takeaway was clear: we need to “fund the future now” and close loopholes in public education funding.

Speakers encouraged everyone to pass the Proposition 13 revision measure on the 2020 ballot that would charge companies in the state billions of dollars more in property taxes. This would give California about $11 billion more per year which could support education.

When asked about what anyone could do to contribute to this movement, Superintendent Parvin Ahmadi said, “Every year, we need to constantly talk to politicians who have the decision-making power to make sure that they hear our voice and they understand that in order to have a bright future for our country, for our state, we need to take care of our students. That means that we need to take care of those who are working with them day in and day out in the classroom.”