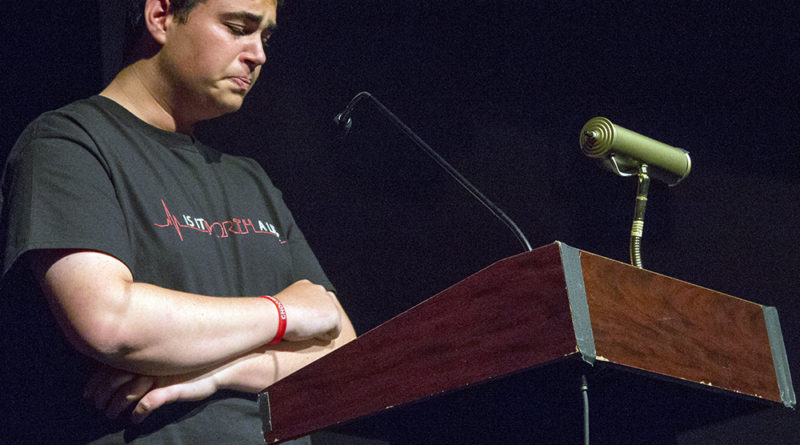 Seniors and juniors gathered in the Center for the Arts on March 23 as they watched fellow students present emotional letters to their loved ones from beyond the imaginary grave. These select students had been pronounced “dead” the preceding day periodically over the loudspeaker as a part of the biennial Every 15 Minutes event.

Over 20 students were pulled from their classes at various times, each replaced by a single rose placed across their desk. An officer then read aloud a brief obituary that recounted various details of each student’s life, which had been quickly taken away by an accident involving impaired driving.

The goal of Every 15 Minutes is to make students aware of the impact of their decisions and others’ should they drive under the influence of alcohol or drugs. The event closed with an assembly featuring presentations by the California Highway Patrol (CHP), Mothers Against Drunk Driving (MADD), and the “living dead” students themselves.

Carol Leister, the mother of Scott Leister who died after an impaired driver crashed into his car, spoke on behalf of MADD. She recounted her personal experience dealing with grief and urged the crowd to make the right decisions.

Afterwards, a short video of the “living dead” students was played on stage. In the clips, they answered questions about their friends, family, and futures cheerfully, allowing the audience to familiarize itself with them. Following the lighthearted interviews was footage of a fake car crash combined with audio clips of the students frantically attempting to call for help.

Although the video did not feature explicit gore or injury, it got its point across as the CFA filled with silence. Then, a few of the “dead” students received the opportunity to read letters to their friends and family in front of the crowd. The family members of some of the students also read letters in response. Many of the presenters had to pause from their speeches to wipe tears off of their cheeks as some audience members did the same.

“It showed you how much people cared about you. People I didn’t even know cared about me and felt sad about my ‘death.’ It really put everything into perspective on how much control people have over their own lives and others,” said junior Kayla Jordan, who participated in the event.

Every 15 Minutes did not fail to carry an emotional weight throughout its span of two days. Students who felt they needed an extra level of support were welcomed in the new Health and Wellness Center. The event finished by emphasizing the necessity of making good decisions to avoid drawing those emotions in the future.