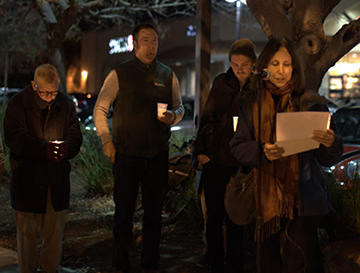 By William Lao and Megan O’Brien

In an emotional vigil, about 20 community members gathered on Mon. Dec. 19 to remember five people who have died in Castro Valley in recent weeks.

“I think it’s unusual for Castro Valley to have so many deaths,” said teacher Todd Finlay. “It’s important for people to show they care, it’s part of building a caring community. If you just let it go, more is going to happen.”

The vigil at the corner of Redwood Road and Castro Valley Boulevard started at around 6:30 p.m. and the ceremony was held in honor of the five recent deaths of Cesar Plascensia, Eder Marroquin, Betty Roosevelt, Andrea St. John, and Jacqueline Burns. The event was organized by the Eden Area Interfaith Council, an organization dedicated to promoting understanding and respect for all faiths.

Plascensia, 37, was shot and killed outside his home on Wilson Avenue on Nov. 28. Marroquin was shot after an argument with another man in a garage of a home on Denning Court on Dec. 4. St. John was brutally murdered before her house was set on fire as on Dec. 13. Burns died in a home fire on Dec. 18. Roosevelt also died recently of an unknown cause.

“With all these religious groups getting together, and the council getting together for this, that was reason enough to show up here,” said Mary Lassack of the Starr King Congregation.

Vigil attendees hope that the community could find peace and understanding in the wake of these tragic events. At the end of the service, the community gathered in a circle and sang the song “Swing Low Sweet Chariot,” written by Wallis Willis.

“This is what we’re all about, to try to join together and to support each other. We are here together partly in grief and recognition. I’ve lived in Castro Valley for around 20 years and I like to think of it as a peaceful, loving, and tolerant place,” said organizer Julie Greenfield. “Things happening like murders and people dying on the street, it disturbs me. I want to keep our community going in a positive direction and this is just a way to gather and support each other.”

One person lost was part of the homeless community and was especially loved by all who knew her.

“As we lost sister Betty Roosevelt we lost one of our own,” said Pastor Jake Medcalf of First Presbyterian Church of Hayward.

“I actually met Betty before I knew her name. I didn’t know of her name until I heard of her death. She was my neighbor, and that was important for all of my boys to know, that the people who live next to the creek, they’re our neighbors, and that we should respect them. She always made me smile-she would do really creative things with some of her stuff along the creek,” said Michael Kusiak.

The fact that a majority of the deaths was a result of homicide is disturbing to most community members, and it was inspirational enough to get the community to gather together.

“We know that in the end we are much more than biological, we are family across all humanity. Help us to remember that we belong to each other,” prayed Medcalf.