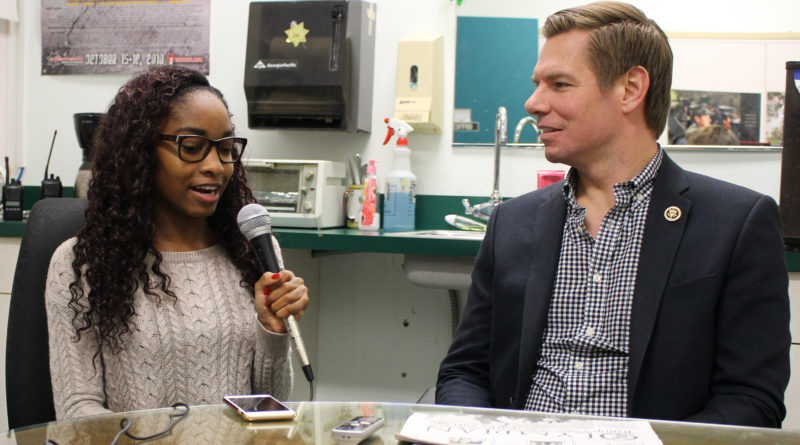 Congressman Eric Swalwell visited CVHS for a town hall meeting about the election results on Dec. 3. Below are his remarks from an Olympian interview.

Q: In light of the election results, what do you think is important for everyone to keep in mind in regards to what Donald Trump can and cannot do?

A: We are not powerless. This is the story of American progress. I’m a football fan and so I look at it like a football game. Right now we’ve gone a few yards back, we’ve got to get back on the field and defend what we care about and for me that means defending the Affordable Care Act, actions on climate change, and the Wall Street reforms.

Q: What are you going to do to protect the undocumented immigrants who have been in the U.S. their entire lives?

A: We’re a country of immigrants. Almost every person that came to our country undocumented came here because they thought that America was a place where they could work hard, do right and support their families. We want to make sure that America is still that place. The overwhelming majority just want to support their families; I want to make sure that we try to bring them out of the shadows to be a part of America rather than to see them deported.

Q: You’re what us young people would call “woke.” You’re live on social media. I know you’ve seen the protests and anger in the American people. What do you suggest people do to translate that anger into positive change?

A: I was really excited to see that about 500 CVHS students walked out in protest because civil disobedience and using your freedom of speech are what this country is built upon. To take your concerns to the streets and let people know that you are not just going to sit back and let this happen. I think for our generation part of being “woke” means going from thought to tweet to action. Taking action means going to the streets stating what you’re considered about, registering to vote, and showing up at the polls. I hope that anyone who was in the street in these recent protests, in 2018 that they take that action to the ballot box.

Q: What do you fear when it comes to the presidency of Donald Trump? What do you feel like it has to do with the future of our country?

A: I fear that he would so recklessly entangle us in another war because he’s just so unprepared to be president, but also so ill-tempered that he can’t really control his emotions. I worry a lot about all those young people that he wants to deport and get rid of in our country; those are the people that are actually going to have to support all of the wars that he wants. I’m afraid that you could see a new normalcy for bigotry, but also you could see so many young Americans sent off to fight his wars. As much as I’m worried about those things, I know we’re better than that. We have stood up for all Americans in the past, and now we’re called again to do the same, and we will.