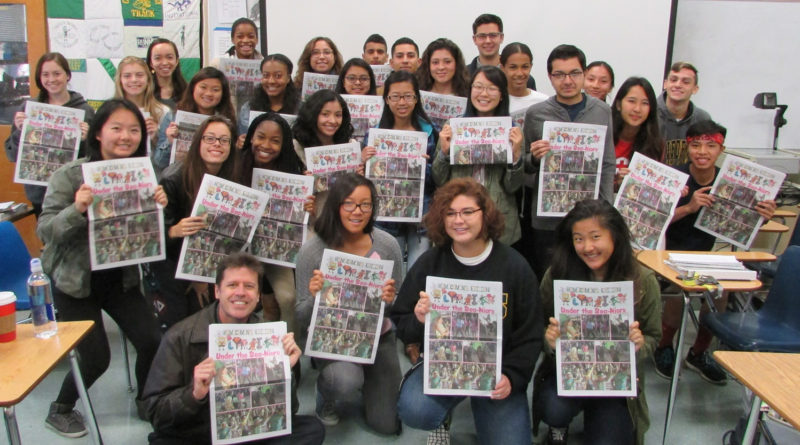 The CVHS journalism class dedicates immense time and effort into creating our school newspaper, The Olympian. This year the staff won a total of 16 awards.

Stephanie Huerta, graduate of 2015, won a first place award from the California Newspaper Publishers Association (CNPA) in Best Writing. Huerta’s emotional story was about the lives of undocumented immigrants including her aunt.

“I see this award as recognition of the voice my aunt failed to have all these years and now has because I was able to write about it. This article is extremely special to me and it makes me so happy that others see that too,” said Huerta. “I never expected to get such distinguished awards for my aunt’s story and am very humbled by the responses I’ve had to the article.”

CNPA also honored 2015 graduate Anna Talajkowski for a news photo of fondly remembered Nicholas “Dubb” Whitaker, who is still missed at CVHS. Junior Brittany Bracy received an award for her feature photo of the annual CV’s Got Talent show. Bracy attended an awards ceremony for her accomplishment. “It definitely makes me more motivated because I got to meet a lot of cool people,” she said.

2015 graduate Rachel Du received two awards for her cheerful illustration on the cover of last year’s graduation issue from both CNPA and Journalism Education Association of Northern California (JEANC).

Seniors Maia Samboy and Jes Smith won a CNPA award for their coverage of the 2015 Close Up trip. Their work was a daily blog of the exciting visit to Washington D.C.. Smith also won an award from Quill and Scroll Society for a boys soccer photograph.

Sophomore Emily Salazar won was awarded two awards from JEANC, one for her editorial cartoon about long lunch lines at CVHS and another for an infographic on the price of the junior prom. “I wasn’t expecting it, this is my first year,” said Salazar. “It does bump up my confidence for when I do comics or graphics next year.”

JEANC honored junior Lauren Eisenman on her feature photo of a choir performance. Senior Anna Nguyen was honored for her beautiful photograph of Terri Byrd, which was used for the memorial service at CVHS. Junior Halley Lin-Jones was recognized for a basketball photo, and junior Anastasia Le won a feature writing award.

At the newspaper’s annual awards banquet, Mia Babasyan and Jacob Schoenfeld were named rookies of the year, Jones was honored as photographer of the year, Sally Liang won the Hall of Fame award, Caitlin Forbes received the MVP award and Nguyen and Laniah Lewis were declared editors of the year.

“Journalism was a way to express myself, make meaningful connections with others, and gain valuable technical skills,” said Huerta, now a student at UC Irvine.

Journalism teacher Matt Johanson says seeing his past and present students winning awards is his favorite part of the year. “Students in our class work very hard and it’s great to see them get recognized and honored,” he said.