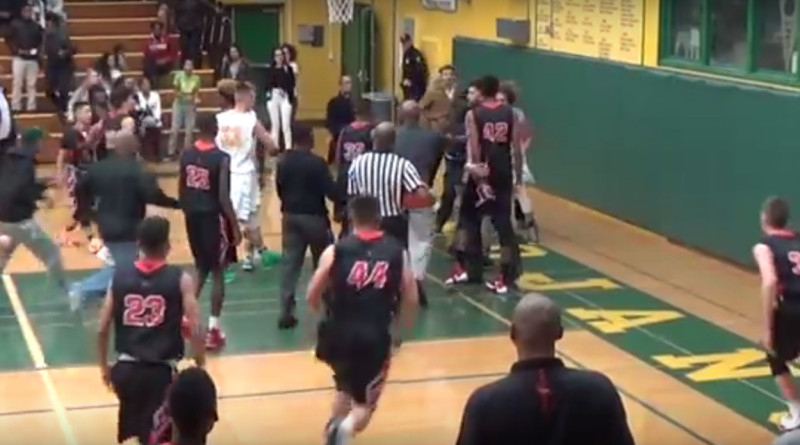 With high tensions from the very beginning, a game between the CVHS and James Logan varsity basketball team was halted after a fight between players on the court on Dec. 8.

The fight between varsity boys basketball players from CVHS and James Logan broke out during the beginning of third quarter with the Trojans down by a point, 45-44. Sheriff’s officers were eventually called in to break things up.

“It was crazy,” said junior Taryn Palmer, who witnessed the game. “Everyone on the court was going all at each other, then everyone on both teams joined in, and then the people on the bleachers came in.”

A video of the game posted online shows multiple players from both teams pushing each other.

One Castro Valley player grabbed an opponent and “threw him against the wall,” said junior Rodrigo Perez, who attended the game.

Players from both teams flooded the court, followed by coaches, referees, parents, school staff and sheriff’s officers, the video shows.

The officers were eventually able to stop the fighting. No one was injured, reported Principal Blaine Torpey, who commended the officers and staff members for “handling the situation swiftly and appropriately.”

The Trojans, 4-1, took their first loss of the year in the shortened game.

CVHS cancelled practices after the event and played some junior varsity boys in the following varsity game. The athletic director, the team’s coach and a school administrator did not respond to Olympian requests for comment.