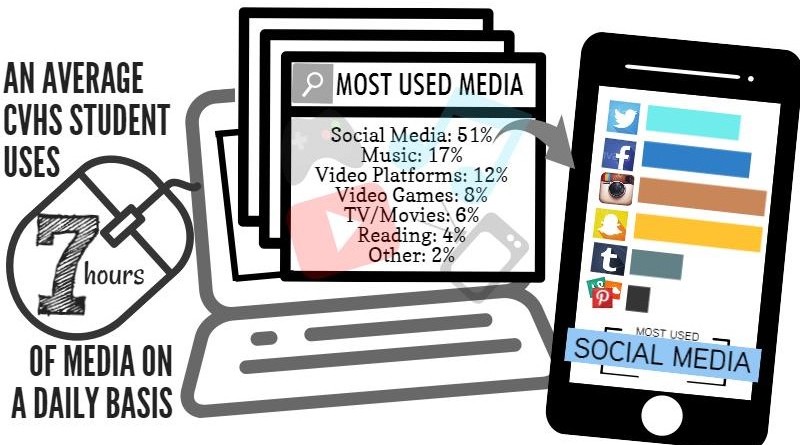 Living in this high-tech, social-media run world, it is no surprise that CVHS students enjoy their electronics quite a bit. According to a recent survey of 100 CVHS students conducted by The Olympian, the majority of students claim to use all forms of media for about seven hours a day.

“It’s hard not to use social media,” said junior Jamie Serrao. “It keeps you connected to your friends and is always right in the palm of your hand.”

Students highly enjoy their texting as well. Twenty three percent of students surveyed said they send and receive over 100 text messages per day.

Despite the seemingly high numbers, CVHS students’ total amount of hours using media was discovered to be below the numbers found by Common Sense Media in a similar survey.  Common Sense Media interviewed more than 2,600 young people aged from eight to 18, making it the first large study to analyze the media usage of teens and tweens.  The survey found that adolescents within this age group spend an average of nine hours a day using all forms of media.

The highest ranked media platforms in the large-scale survey were found to be TV and music. Contrastingly, the survey conducted at CVHS found that listening to music was the second most used media by students, while watching TV was the fifth most popular.

The increase in media usage among adolescents is raising concerns from students and educators alike. Many worry that multitasking due to media use will lower the academic performance of students. Another concern is that if students are spending so much of their day using media, they are not getting any exercise.

When asked why he thought time spent on media was so much higher than time spent exercising, junior Nick Tran responded, “Every student has a smartphone that they can use in class whenever they want. Can you randomly play soccer in class? Case closed.”

“More physical activity would be good, but also face to face conversation,” said anatomy teacher Carol Dixon. “I see it all the time, I get done talking and they pull out their cell phones.  Talk to each other, learn how to read faces. It’s a skill that’s being lost.”