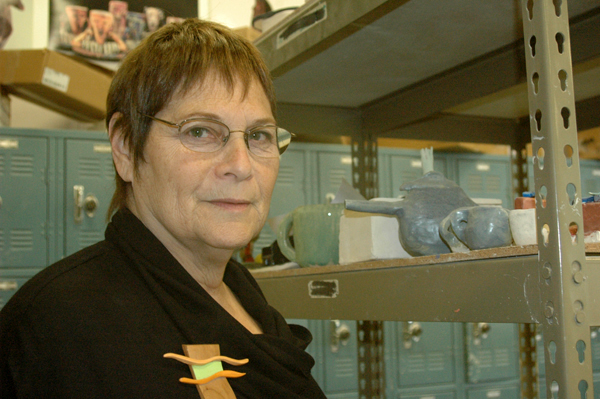 After 38 years of service to the CVHS campus, Barbara Siegel, ceramics teacher and president of the Castro Valley Teachers Association (CVTA), is retiring.

“I had initially applied for something in the fine arts, but there weren’t any art classes at CVHS then, so I taught special ed,” recounts Siegel. However, a few years later, Siegel was allowed to lead the classes she wanted: crafts, studio art, and ceramics.

Traditionally, with so many responsibilities, the CVTA president only teaches one class. That was the case for Siegel, who only taught ceramics this year. “I absolutely love teaching, but once I joined the union, I progressively lost my classes and interest.”

When asked what she’ll miss most when she leaves, she answered, “So much of what I love about teaching is the interactions with the students. Teaching wasn’t a burden [when I became union president], but not being able to offer all of the job to the students was hard. It’s difficult to put into words.”

Social studies teacher John Green will succeed her as union president. “I know he’ll throw himself completely into the job,” Siegel said confidently.

Meanwhile, she reveals that she has plenty of ideas floating in her head about how to spend her new free time. “It was a big responsibility to be an advocate and an artist. I’d like to travel to the Orient, everywhere I can.”

She plans to open her own studio and to look into bonsai, the art of shaping mini trees in an aesthetically pleasing way, and is expecting a grandchild.

“I like to maintain my relationships here at school, too.”

So keep an eye out for Siegel around campus; she may make a return appearance sometime soon.