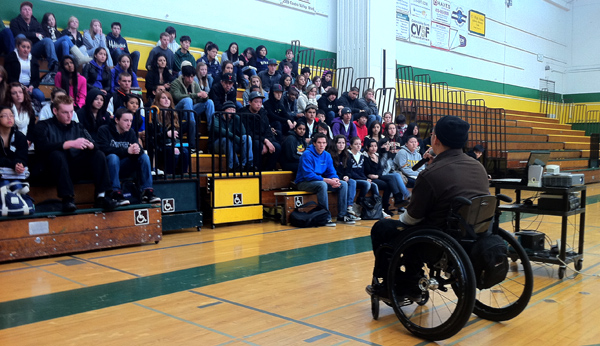 Four years ago, CVHS alumnus Arthur Renowitzky was at a San Francisco nightclub. When the club was getting ready to close, he told his friends he would go get the car and bring it back since it was raining.

“I heard a loud voice that said, ‘give me your chain and your wallet.’ I quickly turned around and about five feet away from me was a guy in all black pointing a gun at me. I was shot immediately. The bullet went through both my lungs and severed my spine. I didn’t have a chance,” explained Renowitzky.

Renowitzky lost all movement from the chest down. Although he was unable to use his legs, Renowitzky was determined not to let this affect his love of basketball and rapping. After years of physical therapy, he took the courts again and is now playing for the semi-professional wheelchair basketball team, the Spokes. Renowitzky has also pursued his love of rapping and now his music video “Don’t take my shine” has over 19,000 views on YouTube.

What is most inspirational about Renowitzky though, is how he has turned his personal tragedy into the driving force behind his life. Renowitzky started the Life Goes On Foundation in 2007. The foundation is a non-profit organization dedicated to fighting gun violence amongst youth and finding a cure for paralyzing spinal cord injuries. Renowitzky and his organization travel around the Bay Area speaking to students, young adults, criminal offenders and the general public about the tragic realities of gun violence amongst youth. They visit hospitals, rehabilitation facilities, high schools, private residences and medical clinics to support those suffering from spinal cord.

One of the high schools he visited most recently is our home, CVHS. Renowitzky was one of the many speakers during Days of Diversity and gave multiple presentations about his life, the tragedies that affect us all, and how we can move past them, how that no matter what, life goes on.

Renowitzky envisions a world where he can one day walk, run and play with his loved ones without the threat of senseless gun violence. To achieve these goals, Renowitzky and his team have committed themselves to speaking-out publicly against gun violence while committing themselves to helping find a cure for spinal cord injuries. Renowitzky’s motivation, perseverance, and true heart are the reason he has been able to make such a comeback, he is a true testament to his organizations slogan, Life Goes On, in spite of everything.